Live 35th Daytime Emmy Blog: The Bold and The Beautiful!

4:25/7:25 Some GHer’s and AMCer’s stopped and talked with Rebecca and Finola. A very blond Tyra Banks talked to Rebecca and she towers over her! Regis and his wife Joy talked with fashion dude Nick. GLers talked with Ricky Paull and gave him some grief. No B&B sightings!

4:30/7:30 Ashley Jones (Bridget) was getting primped while talking to Rebecca, but of course my TV went on the fritz while she was talking, but she looks beautiful!

4:43/7:43 Tyra got the Dove “Most Fashionable moment of the Night”, as determined by Finola maybe? Not really sure, or that I agree, but I’m not voting! Okay I’ve been wrong about Nick Verreos. He hasn’t been interviewing with Finola. I know nothing about fashion, I’ll see if I can find his name online somewhere!

4:48/7:48 As the time grows near for the big moment, the stars are rushing in to grab their seats. I found out the interviewer with Finola is Lawrence, but can’t find his last name.

4:50/7:50 Bobbie Eakes (ex-Macy) looks stunning! Great hair cut (inverted bob?) sleek white dress with a cut out at her cleavage – hot! Ten minutes until show time, unless you’re on the West Coast like me. Anyone else out there feeling my pain while having to wait three more hours until the show starts?

4:57/7:57 Rebecca just said that when Ashley Jones got out of her car she ripped her dress, but Rebecca’s designer was right there to sew it up for her!

Just a reminder, last Friday B&B picked up an award at the 35th Annual Creative Arts Awards for Outstanding Achievement in Multiple Camera Editing For A Drama Series, and tonight Heather Tom (Katie) is up for Outstanding Supporting Actress! Heather will also be presenting an award with fellow castmate Jack Wagner (Nick)!

I’ll be back later to share my insight as I watch it.

8:00 It’s finally time on the West Coast to start the Daytime Emmys! I tried not to get spoiled, but caught a glimpse of a couple of winners. Oh well, here we go!

Taped segments can be a little too much, but when Elizabeth Hasslebeck called Cameron Mathison, Josh Duhamel, that was funny!

8:04 I like that each show gets their own table. It’s probably a little nicer for them so they can drink and have fun together! And the more they drink, the better their acceptance speeches will be I’m sure.

8:06 Sadly Heather didn’t get The Outstanding Supporting Actress award. It went to Gina Tognoni from Guiding Light. I think they were all deserving in this category, but it would have been nice for B&B to get recognized.

8:18 Tyra just won for Informative Talk Show. Congratulations to her, but I really only care about the soap categories.

8:19 They’re showing clips of OLTL for best show and since B&B isn’t nominated I hope they win.

8:27 Outstanding Younger Actor goes to Tom Pelphrey of Guiding Light. Melody Thomas looked amazing presenting it by the way. I really thought Van Hansis would win, but I recognize Tom does a good job.

8:30 Wow! Susan Haskell (OLTL) looks good! And Michael Easton (OLTL) smiles! That’s always nice to see. Okay, Outstanding Younger Actress goes to Jennifer Landon from As the World Turns. I thought she’d get it. Her dress is different, but I think I really like it! What was with the French? Anyone know?

8:36 Montel Williams presents some of the children's programming that won at the Creative Arts and Entertainment Awards. I have to say he looks really good, but I didn’t realize his show was still on.

8:38 Van Hansis and Jake Silbermann from ATWT present Talk Show Host. Is there any doubt Ellen will win? And….she does.

8:46 Outstanding Drama Series directing team goes to OLTL! Yay! They really had a great year and truly turned the show around.

8:50 GL clips for Outstanding Show play. The scenes of Tammy’s death are a good reminder of how good the show can be, but I think they need to refind their way.

8:52 Heather Tom and Jack Wagner present the award for Legal/Courtroom Program. Heather changed into a different dress from the one she’s auctioning off and wore on the red carpet. Christina’s Court won.

9:00 Okay it’s the halfway point. The show’s really moving! Time for the Outstanding Supporting Actor. I like everyone in this category too! But I want Trent Dawson to win. Actually I’d like to Tuc Watkins from OLTL win, but he’s not nominated. And the Emmy goes to Kristoff St. John from Y&R. I do like him and think he’s very deserving. They just said he won for Younger Actor in 1992!

9:04 The Emmy for Outstanding Drama Series Writing Team does not go to B&B, but OLTL. I have to say, head writer Ron Carlivati has done an amazing job and he so deserves this award for turning OLTL from boring into must see drama and even comedy!

9:11 I don’t know why award shows insist on forcing “playful” banter among the audience members. It rarely works.

Next up is Outstanding Talk Show/Entertainment. And the winner is…Rachel Ray! I thought Ellen usually swept these categories. Good for her! She beat out Ellen and The View. Impressive.

9:23 Jimmy Kimmel presents Regis Philbin with the Lifetime Achievement Award. Jimmy's funny and the clips are entertaining, but back to the soaps! Outstanding Lead Actress, Actor and Show are coming up!

9:36 Did you see Lesli Kay’s face when Cameron and Sheri did their kissing bit? She looked less than impressed. Hilarious! Ooh…scenes from the Metro Court hostage crisis on GH. Truly fantastic soap opera moments!

9:41 Tyra announces Outstanding Lead Actress. Why Tyra? Why not Michael LeBlanc from Y&R who won Lead Actor last year? Anyway, Jeanne Cooper looked truly surprised when they called her name. Her son Corbin Bernsen was with her. In all her years on Y&R this is her first win. Unbelievable!

9:45 Susan Lucci presents Outstanding Lead Actor. This makes more sense! And the Emmy goes to…Anthony Geary from General Hospital. While he got a standing ovation, after his speech you could see some people in the crowd looking ready for the show to wrap up! And this show is only two hours! Can you imagine sitting through the Oscars?

9:53 And now time for the big one. Barbara Walters (why Babs?) presents The 2008 Outstanding Drama Series to General Hospital! I am a diehard GH fan and I couldn’t tear myself away from the Metro Court Hostage storyline, but I truly wanted One Life to Live to win. But since I love General Hospital I can’t complain.

10:00 PM: Thanks for hanging out with us tonight! Although the show has come to a close, the best is yet to come! At this moment, Soaps.com’s very own Editor-In-Chief Christine Fix and reporter Shannon Burrell, as well as our friend Shaun Proulx from ProudFM, are working hard to bring you all the scoop from the SOAPnet pre-Emmy party and the Emmys themselves! Be sure to stop by throughout the weekend and in the coming weeks for the inside Emmy scoops, backstage interviews, photos and much more!

Check out the full list of the 2008 Daytime Emmy Winners.

For all the best Emmy news please visist our Soaps.com Breaking News section on our homepage and the Main News Room where you can take a peek at all of the live blogging going on tonight for each individual soap!

Soaps.com wants to send our congrats to all of tonight’s winners – and to our readers for spending the evening with us during our live blogging event! 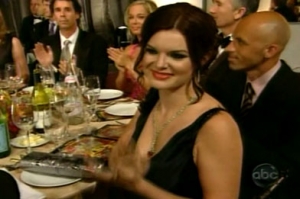 Welcome to Soaps.com’s 35th Annual Daytime Emmy Awards live blog for The Bold and the Beautiful!

Unfortunately, I wasn’t able to join Chrissi and Shannon on the red carpet, but I will be able to chat about them here with you guys! As you know, I am on the West Coast so I won’t see the show until after all you East Coasters see it, but feel free to chat amongst yourselves below about the show.

I’m watching the SOAPnet pre-show right now and just saw Heather Tom in her Jack Mackenroth designed dress. She looks beautiful! Anyway, enjoy the show, have fun posting below and I’ll be back when I get some B&B scoop on SOAPnet.

4:00 (PST)/7:00 (EST) Jacqueline MacInnes Wood and Texas Battle talked with Finola Hughes and fashion guru Nick Verreos. On his new role as Marcus, Battle said, “The cast is great we all get along. We get along on the set. Who would have thought I’d be here?” Jacqueline is wearing a designer from Toronto. I think she said it was Repita but I can’t find any info on this, so I’m probably spelling it wrong!

4:15 (PST)/7:15 (EST) Susan Lucci (Erica, AMC) just stopped by to talk with Rebecca Budig (Greenlee, AMC). She’s presenting best actor. Not too many shots of B&B people yet. But everyone is talking about how scorching hot it is on the red carpet. 100 degrees! Maybe I’m glad I had to stay home in the comfort of my AC instead of burning up on the red carpet! Not really, but I’ll take what I can get!

Just saw Patrick Duffy (Stephen) from B&B! Looking sharp in a tux. And now the cast of SOAPnet’s “MVP” are chatting with Finola. I kinda want to watch the show to see what it’s all about, but haven’t yet. Anyone watched it? Some pretty hot shirtless guys if nothing else.

4:20/7:20 Antonio Sabato Jr (ex-Dante) talked to Rebecca about joining GH: Night Shift and being on Celebrity Circus. He’s dong a Chinese pose next week on the reality show, where he will be jumping and climbing on a 20-foot pole! Good Lord his dimples are truly impressive!

Lee and Bradley Bell stopped by to talk to Ricky Paull Goldin (Jake, AMC). Nominated for Best Writing and directing for B&B. Didn’t learn much, Ricky just talked about the awards they are up for, but always good to see them! 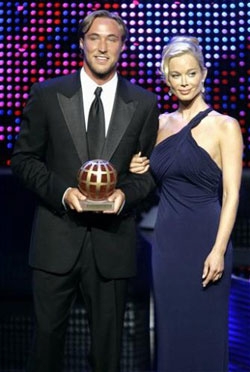 Upcoming Appearance by The Bold and the Beautiful's Jack Wagner