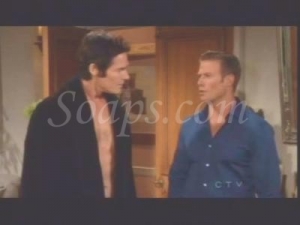 Well, the Hope/Liam/Steffy triangle finally blew up this week. One thing “B&B” does consistently is push the envelope – they certainly don’t shy away from controversy – so having Liam propose to his father’s ex-flame the same night his fiancée dumps him is pretty much par for the course. Here are my thoughts on the week:

Rick’s return.
I’m glad to see Rick back on the canvas, and thought the show did a good job of easing him back in this week. I look forward to seeing what he’ll get involved in, both in business and love.

Bachelor party.
Liam’s bachelor party was not only the lamest stag party ever, but it must also qualify as the most boring party ever thrown by Dollar Bill. I also thought it was weird that Oliver was there given his history with Liam and Hope. As for Bill’s speech to Liam on the terrace about loving him more than his company, I wasn’t quite sure where to peg that on the sincerity meter. I’m sure in Bill’s twisted logic he believes it to be true, but wasn’t Bill’s whole drive to get Liam away from Hope and together with Steffy born out of his concern about Liam’s work? Hmm.

Giving myself to him completely.
I found Hope’s sudden about-face on giving up her virginity before marriage made it seem like she’s just yo-yoing on her stance. Mere weeks ago she was in his bed and was absolutely not ready to go there, then she became a bit of a tease while also being the poster girl for waiting until after marriage, and this week she decides she’ll move in and start having sex right away. Made the character seem more than ever like she’s not in touch with what she wants – she’s all over the place.

I guess you won’t mind that Steffy’s wearing it then.
You could just feel how much Taylor loved delivering that line to Brooke. Classic soap moment! Taylor's reaction to Steffy announcing her engagement also pleased me. Stunned, she simply said, "Okay." Hilarious!

Warring emotions.
One thing “B&B” successfully achieved in the Hope/Liam/Steffy triangle the past two weeks was to yank me around by my emotions a bit. Last week I fell for Steffy and Liam on the beach, this week I felt terrible for Hope when she saw them kissing, then I was happy for Liam and Steffy in their morning after glow, and then sorry for Hope again when Steffy told her about the ring. On the whole, I’ve wanted to see Liam in a more mature relationship, and I do like his chemistry with Steffy. The trouble is, I hate to see Steffy be willing to settle for a man who is still in love with someone else. I’ve not been completely immune to the romance of Hope and Liam, but they had a tendency to be boring, and there was an underlying feeling that Hope was too young for such a relationship. Now it’s time for you to weigh in. Are you Team Hope or Team Steffy? Let us know by voting in Soap.com’s The Bold and the Beautiful Snap Poll: Liam’s Lady.