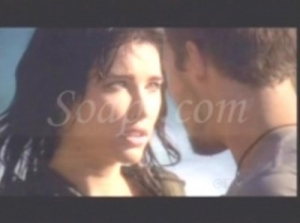 I thought it was a pretty good week on “B&B.” It started out strong and we got to see a good array of characters. The week ended with everyone focused on Hope and Liam’s relationship again, which most viewers are tired of, but at least things are finally being stirred up to the point where we can expect a conclusion and other stories to come to the forefront. Here are a few thoughts on the week:

Falling in love.
The beach scenes between Steffy and Liam were very effective in making viewers see them as a potential couple. Particularly because they seemed to be seeing each other as people rather than sexual objects and it was a good change from Steffy merely offering herself up for a roll in the hay. I was definitely drawn in by their connection, no doubt about it.

Promoting Steffy.
Steffy already had her plan to snag Liam in motion before Bill came on board, and would have pursued Liam with or without his help or blessing, it’s true. However, the idea that Bill isn’t weirded out by the pairing, and that he and Justin are following the action at Liam’s house via hidden camera, definitely qualifies as disturbing.

Battle of the brothers.
I quite liked the battle of the brothers this week. It's about time Thorne demanded some respect and recognition for his hard work, not to mention that it's satisfying to see Ridge taken down a peg or two when he starts spouting the egotistical crap. Don't get me wrong, Ridge isn't all bad, and he's earned his position at Forrester, it's just that Thorne has never gotten his due from the family. I'm enjoying this gear up for a power struggle. Whose side are you on? Let us know by voting in Soaps.com's The Bold and the Beautiful Snap Poll: Sibling Rivalry.

Steffy-free zone?
I've always found Bill and Katie to be a hot couple, but she came across a little lecture-y in their bedroom scene this week.

Surprise!
Gee, can you see the writing on the wall for Hope? Now that she's decided to sleep with Liam any number of things could go wrong. She could wait for him at his house only to be surprised by him coming in with Steffy, or they might have their first time, only for Liam to realize afterward that he's fallen in love with Steffy. Feel free to leave a comment letting me know what you think will happen.