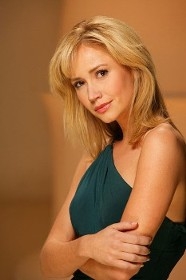 Ashley Jones’ (Bridget Forrester, The Bold and the Beautiful) new movie, “Secrets From Her Past” is set to debut on Lifetime this Sunday September 25 at 8.00 PM EST. In the film, Ashley plays Kate Collins, a woman who is forced to move and change her name after witnessing the murder of her boss. Ashley is not only acting in the movie, but she produced it as well. Antonio Sabato Jr. (ex-Jagger, “General Hospital,” ex-Dante, “B&B”) also has a role in the film.

Ashley Jones Returns To The Bold and the Beautiful on October 18. Are you excited for Bridget’s return to the canvas? Let Soaps.com know by voting below.

The Bold And The Beautiful Snap...