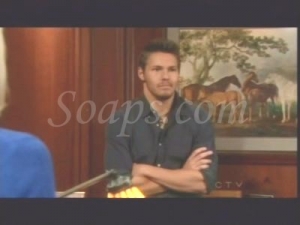 Many viewers have been hoping for a meaty storyline for Thorne Forrester and it appears to be happening. It’s a nice change from the constant focus on Ridge. Now if we could only move past the story of Hope’s virginity things would truly be looking up. Here are my notes on the storylines this week:

Prince Thorne?
As a viewer who has been waiting for Thorne to get a storyline, I was happy to see that he was the one who showed up on Taylor’s doorstep. I thought the issue of her involvement in Darla’s death was swept under the carpet a tad quickly, but maybe it will resurface at some point. Storyline-wise, although I like the idea of a power play at Forrester, I don’t really see where any of them other than Thorne has earned the right to play a big role at Forrester. In any case, as weird as it was for Thorne to show up at Taylor’s with a plot for an uprising, and to wind up kissing her as well, it’s something a little different so thumbs up!

Hope for the future?
I’m not sure Hope and Liam are going to make it based on this week’s events. After spending months happy to go on picnics with Hope, Liam has suddenly become unbearably sex-starved, and Hope has become a self-important tease – not a good combination.

Here's to making that happen.
Does anyone else find it strange that Bill and Steffy are now as consumed with the idea of her being with Liam, as they once were with being together? I simply cannot believe that Dollar Bill's enormous ego isn't affected by Steffy's sudden defection to his son, convenient as it may be at the moment. In any case, I don't want to see Steffy get Liam by throwing herself at him. It would be great if he chose to be with her because they connect in a real way. It's not that I don't think Steffy was hot with Bill, it's that I like the idea of what she could bring out in Liam, who is boring with Hope. What do you think of Bill and Steffy planning to get her together with Liam? Let us know by voting in Soaps.com's The Bold and the Beautiful Snap Poll: Bill and Steffy.