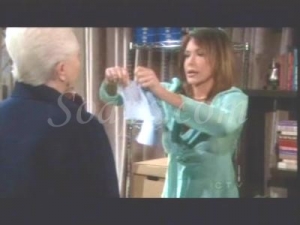 Only three episodes this week, and thankfully not all of them were devoted to the Hope/Liam/Steffy saga. Here are my thoughts on the week:

Working out the knots.
If Liam was truly ready to be married to Hope he wouldn’t be letting Steffy work him over while shirtless, nor would he let her get close enough to steal a kiss. Liam and Hope are both too young to wed. Whatever Steffy’s issues, she and Liam have chemistry and I’m all for them having some fun. I think it would make for some great tension with Bill too. As for Hope, she’s living in a fairy tale – and by the way, what girl Hope’s age talks to their grandfather about sex – for real, she needs a BFF or something, stat.

The kiss.
Ack! I couldn’t believe my eyes when I saw Justin kissing Katie’s doctor – what was that all about? It’s been mere months since Justin married Donna, the true love he pined for his entire adult life, and now we see him kissing another woman and asking her to stay in town for a few days as well! Did he want to hook-up? What a twist. I don’t know what to make of this, but I hope it’s explained.

Amber reaches out.
No one can accuse Amber of not going after what she wants! It took a lot of nerve for her to ask for forgiveness from Donna and Justin, and it was an unexpected moment when Donna actually offered it. As for Amber flirting with Marcus, I see something developing here eventually - they're cute together. Of course, there's always the possibility that the writers won't pursue this relationship because of Jacob Young Returning as Rick. Remember the Amber/Rick/Kimberly triangle when he portrayed Rick before? Read what the actress who played Kimberly had to say about the chances of this triangle being revisited through Interview: Ashley Cafagna Tesoro on Return to The Bold and the Beautiful.

Making amends.
Didn't Stephanie already do this making amends routine with Brooke when she sang in the restaurant? Oh well, watching Stephanie make the rounds was better than watching more Hope and Liam stuff. The scenes with Taylor ripping up Stephanie's papers were particularly good.

Stray cat strut.
So, I wonder who's at Taylor's door? They certainly made it look like it was going to be Nick - or even Ridge - since they were both talking about her in previous scenes. Let us know who you think it will turn out to be by voting in Soaps.com's The Bold and the Beautiful Snap Poll: Who’s At The Door?