Interview: Ashley Cafagna Tesoro On Return To The Bold And The Beautiful 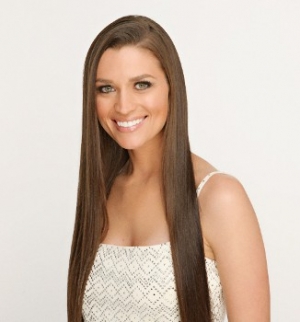 I’d be very open to coming back to the show…

Soaps.com had the pleasure of catching up with former “The Bold and the Beautiful” actress, Ashley Cafagna Tesoro to chat about the possibility of her character, Kimberly Fairchild, returning to the show. We also got a refresher on the character’s past storyline, and found out what Ashley’s been doing since she left “B&B.”

Soaps.com: Rumors began swirling about your possible return to “B&B” after it was announced that Jacob Young is returning to the role of Rick Forrester. Can you refresh our memories about your character’s storyline with Rick?

Ashley: When I was on the show, Rick (then Jacob Young and Justin Torkildsen) and Amber (Adrienne Frantz) were in a relationship and she had gotten pregnant. They weren’t married and she was a little older than him, he was a teenager, so it was a big thing for the Forrester family that Rick had got Amber pregnant. Rick was set to marry Amber, and then Kimberly came on the scene, and was basically the opposite of Amber, who was more of an edgy character, kind of like the bad girl/rebel, and Kimberly came in as the sweet, innocent, virtuous character and caught Rick’s attention. Kimberly and Rick became really good friends. It never turned into a full romance because Rick was always feeling the pull of his integrity to be with the woman who he’d got pregnant, but Kimberly was always in his heart. Kimberley was also really tied in with the Spectra family, her half-sister was Macey (Bobbie Eakes), so there was another storyline later with Thorne (Winsor Harmon) and Brooke (Katherine Kelly Lang). My character was also a model, and because I’m a singer, Brad Bell wrote in singing for my character as well.

Soaps.com: Where did things stand with your character when she left the show?

Ashley: When Macey had that car wreck [and passed away], Kimberly was the one who drove up on the scene and it really took a toll on her emotionally. She went through a very dark period where she became a little bit rebellious and veered from her original virtuous ways – not too far – but she kind of had an emotional breakdown. Her father came to get her, and told her to come with him and he’d take care of her. Basically, it’s rumored that Kimberly is in Italy right now. She needed to take time away and go be with her father after the breakdown.

Soaps.com: Where do things stand on a possible return?

Ashley: I've been in contact with Brad Bell and nothing is set in stone, but he has put the possibility out there that Kimberly might return to the show to once again rival Amber Moore. I think the fans really loved Rick and Kimberly's relationship because it was so opposite of Amber and Rick's, which was so tumultuous. Rick and Kimberly had a more innocent love and a friendship between them. I think people really liked seeing that, and that's where a lot of this buzz has come from. The fans stuck by me all these years and still love my character, and it's so flattering.

Soaps.com: What have you been doing since you left the show?

Ashley: I stepped away from the acting industry several years ago. I'm in the Christian Ministry now with my husband and we do national and international charitable outreach and biblical ministerial outreach. Additionally, I've been focusing on my gospel and country music career. I've already released two albums and I'm working on a third album right now. Last year I had the opportunity to open for Jackson Browne; he's a legend in music, so to open one of his shows was a great blessing for me and an honor. So that's where my focus has been. I also went back to school and got my psychology degree, and I'm working on a communications degree.

Ashley: [laughs] And now all of the sudden all of this fan-generated buzz is taking place and it's really touched me to see that the fans still care and remember me. I got a communication from Brad Bell saying that I'm an extraordinary singer and actress, and that there is definitely a possibility that he would bring my character back. It's just about where he feels my character will fit in if the storyline goes that direction. If the fans want it, Brad's always been sensitive to what they like, so this is something he could definitely be inclined to do. I told Brad that I'd be very open to coming back to the show and reprising my role as Kimberly. I'd love to work with him again.

Soaps.com: We'd love to see you back.