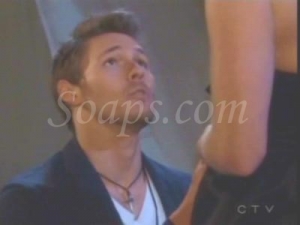 Well, this week was all about Hope and Liam’s relationship – everyone on screen was involved in it. If you weren’t interested in that storyline there was a few scenes with Marcus, Amber, and Dayzee, but not much else. Here are my thoughts on this week:

Left on the catwalk.
I began the week feeling sorry for Liam, who was left standing on the catwalk after one of the most romantic proposals imaginable. Hope’s routine had just driven me around the bend by this point. The bottom line is that everything that went on this week in the Hope/Liam relationship just cemented my opinion that she is nowhere near ready for a serious relationship with a ‘boy’, as she would say, let alone marriage. Liam needs to wake up and smell the scented oils – he may have met the right girl, but it’s at the wrong time. Hope should be at college somewhere right now attending pep rallies. I actually feel kind of sad for her that she’s missing out on all of that because she’s so focused on finding a perfect fairytale romance – as she said herself, what’s the rush?

The mother/daughter talk.
I got a kick out of Brooke’s version of helpful advice to Hope this week. It was classic Brooke to pull out some lingerie she had kicking around from her old line and give Hope a little (wink, wink, nudge, nudge) suggestion about how to make things special. On one hand, it’s great to see the lines of communication open, but it was awkward, and probably a little too much for Hope to handle given her conservative nature. Maybe Brooke should be a little less involved, and excited, in the future. What did you think of Brooke’s talk with Hope? Let us know by voting in Soaps.com’s The Bold And The Beautiful Snap Poll: Brooke’s Advice.

Dayzee's direct talk.
Well, Dayzee certainly dialed Amber in on how things are this week during their conversation. I like that Amber attempted to be straight with Dayzee rather than resorting to anything underhanded, even though it didn't work out. I'm still on the fence about the Marcus and Dayzee pairing, as she seems to be default dating him because Thomas disappointed her. It was really nice to see characters not obsessed with Hope and Liam's relationship though!

Let's all weigh in.
It seemed like everyone had an opinion on Hope and Liam's relationship this week - except Bill, who still hasn't been informed that his son is engaged. I love the way everyone says it's a private matter and then continues to dissect it at length. And what was with Taylor worrying to Ridge about the effect the proposal would have on Steffy because she is so attached to Liam - what's it been, like three days since he rescued her? Very odd.

Don't marry Hope.
I'm with Steffy on this one - as I explained earlier, I don't think Hope's ready for marriage. The sudden switching of Steffy's affections from Bill to Liam doesn't necessarily bode well for her to take Hope's place - unhealthy rebounding and all that - but she certainly would keep him happy in the interim. By the way, is anyone else getting a kick out of Steffy using Brooke's lines about 'fate'? Anyway, I'd like to get to know Liam as a character in his own right because he's been with Hope almost since we were introduced to him.