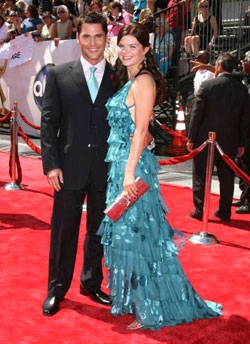 Updated August 14 – Heather Tom’s Daytime Emmy dress designed by Jack Mackenroth was auctioned off for $700 on the Clothes Off Our Back website. Proceeds of the sale will benefit the San Antonio AIDS Foundation, amfAR and the National Association of People with AIDS.

Updated June 26 – Heather Tom’s Daytime Emmy dress is still available for auction at the Clothes Off Our Back website benefiting HIV/AIDS charities. The Jack Mackenroth dress is pictured here with both the designer and actress on Emmy night.

Heather Tom is the kind of soap star who’ll give you the gown right off her back to help a good cause. The Bold and The Beautiful star has teamed up with Project Runway contestant, Jack Mackenroth, to create a very special gown to celebrate her 12th Daytime Emmy nomination.

Mackenroth will be designing a couture gown specifically for Tom to wear during her big night at the 35th Annual Daytime Emmys this year. Immediately following the ceremony, fans will be able to log on to the Clothes Off Our Back website and bid on Tom’s one-of-a-kind dress. The proceeds earned will be donated to three HIV/AIDS charities just in time for National HIV Testing Day, June 27th, just one week after the Emmys.

Both Tom and Mackenroth are passionate when it comes to the fight against AIDS. Mackenroth has been HIV positive for 17 years and has used his appearance on the hit reality show Project Runway to become a role model in the community. Tom has been active in the fight against HIV and AIDS since beginning her daytime television career.

The three charities that will benefit from Tom's and Mackenroth's unique collaboration are amfAR (The Foundation for AIDS Research), the National Association of People with AIDS (NAPWA), and San Antonio AIDS Foundation (TXSAAF).

Soaps.com and Tom encourage interested fans to visit the Heather Tom or Jack Mackenroth website for more information and live links to Clothes Off Our Back. 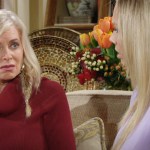