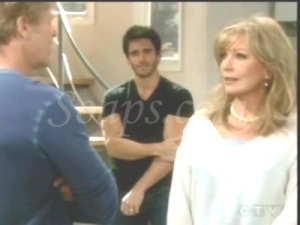 For me it’s been a pretty good week of “B&B.” There was a new triangle shaping up, the promise of Bill going into business with Nick, and the fashion show. Here are my thoughts on the week:

You saved my life.
I didn’t actually see these scenes, but it would seem it was a pretty powerful experience for Steffy and Liam. Of course it’s wildly unhealthy and ridiculous for Steffy to transfer her affections from Bill to Liam in a nanosecond, but boy is it entertaining! Steffy is excellent at getting Liam all hot and bothered, and I don’t mind telling you I’ve been waiting for the character of Liam to get away from the teenybopper-like storyline he’s been stuck in. Don’t get me wrong, I respect Hope’s position, but it makes for very dull viewing. I’m excited about the prospect of Liam and Steffy. How do you feel? Let us know by voting in Soaps.com’s The Bold and the Beautiful Snap Poll: Steffy or Hope?

Better business…
I’m also excited about the prospect of Bill going into business with Nick over at ‘Jackie M’. I’m over the huge focus on the Forresters, and look forward to a rivalry being reignited between the fashion houses, and the other characters involved getting something to do. On a side note, I’d really like it if they would give Owen and Jackie something to do other than maul each other – it’s really gotten tiring watching them make out while Nick rolls his eyes.

Reunited and it feels so good.
I don't mind Marcus and Dayzee together, but I really would like to see Marcus give it a shot with Amber and their baby. I'm hoping some sort of storyline develops to this effect. I also don't believe that Dayzee is done with Thomas.

On the sidelines.
I'm bored of Brooke and Taylor bickering over Steffy/Liam/Hope. Brooke has no place advising anyone on how to live their life, given her track record, and Taylor should stop arguing in favor of her daughter's poor decisions just because she can't stand to agree with anything Brooke is saying. Grow up. For his part, Ridge is utterly useless in all this - he listens to what everyone's saying and stands there looking stupefied. If he does bother to chime in, it's usually a ridiculous statement. Let the kids handle their own stuff.

The fashion show.
I love that there was a fashion show. The clothes weren't too great - that had to be the plainest 'showstopper' I've ever seen. The gathering was great, though, full of snarking, and even came complete with a surprise (and romantic!) marriage proposal. I suspect Hope will do a runner, after all, she's not stupid - she's going to realize this has something to do with Liam wanting sex.