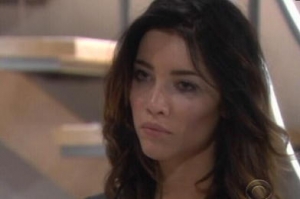 Finally gets it right. (Soaps.com)

It was a wild week on the show, as Bill made his decision and the fallout was felt all over Los Angeles. There were some great scenes this week. Here are my thoughts on what went down:

He loves me, he loves me not.
Bill made his choice this week and shockingly chose to stay with Katie. While it was great to see Katie get defiant and throw around orders, I’m not buying that she challenges Bill. Also, I wouldn’t want a man who strayed with someone else. She has to know that there is some guilt involved in his staying with her. There’s better men out there, Katie! True-Dollar Bill is smoking hot. Yet, he’s not exactly husband material. I also really felt for Steffy. It is true that she should not have been involved with a married man, but I really believe she loves Bill and was devastated when he left her. Great acting by the ladies in this triangle.

Glass Houses.
I’m wondering where Hope learned to ride a moral high horse, considering her DNA and environment. I think she made a big mistake going over to see Steffy, all for the sake of defending her family. I do get annoyed when I hear Hope throw around family to Steffy, considering Ridge isn’t her real dad. If I were Steffy, that would drive me crazy. Why is it that Hope will forgive her mom for sleeping with her boyfriend, but she can’t understand that Steffy may have actually been in love and over her head with Bill? I certainly don’t condone affairs, but I also don’t think it’s good to judge others without trying to understand how the situation happened. Hope should worry more about keeping her cutie pie boyfriend satisfied, or else she might just lose him. It’s pretty clear Steffy is likely to make a play for Liam.

Mind your business.
Brooke and Taylor's discussion over the mess with Katie, Bill and Steffy also annoyed me. I understand Brooke wants to defend her sister, but she is in no position to judge anyone. Once you sleep with your daughter's boyfriend by accident, you lose the right to look down on others. I would think of all people, Brooke might actually understand Steffy and reach out to her.

Well-done!
On most days, I find Ridge rather useless. However, I really enjoyed seeing him take a stand and defend his daughter this week. Bill deserved to be punched, and I'm glad Ridge did it.

Three's Company.
My favorite scenes were with Nick, Jackie and Owen. It was funny watching them all live under one roof together. It's really a nice departure from all that Forrester drama. I'd love to see Nick find a woman who could fit into this trio-not someone like Katie or Brooke. Someone fun, with a sense of humor. Who would you like to see Nick with? Vote in our 'Snap poll: A Pick for Nick' and let us know!

That's all I have for this week. The fabulous Candace will be back next week with her awesome rants. Have a great weekend!