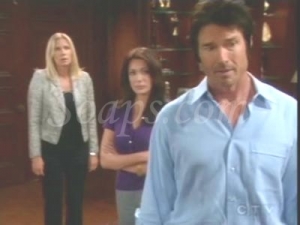 Well, it was all about the Katie/Bill/Steffy triangle this week on “The Bold and the Beautiful.” The Amber storyline was touched on, I guess to set up for things to come. Here are my thoughts on the week:

How long?
Wow, Katie’s outrage was explosive this week as she realized Bill had been carrying on behind her back. Delicious to watch! I was really taken aback, though, when I thought I saw Bill smirking at her devastation! Maybe I was seeing things, but it sure looked that way for a moment.

He’s leaving her to be with me.
I don’t know why they write Steffy to be so unpalatable sometimes. If you’re taking a married man for yourself and your good with it, fine – but maybe don’t brag about it. That’s the side of her that niggles me. Other times, I find Steffy quite mesmerizing. Her rapport with Liam as she teased him about Hope (I can see these two together – Bill and Hope would boil!), the intense scene with Bill when she threw her arms around his neck and pleaded with him not to stay with Katie (his yelling in her face was a bit much), and the layered confrontation with Katie, where Steffy’s feelings were clearly all over the place.

Free for all.
I don't even know what to say about the melee in Ridge's office with him, Taylor, and Brooke. I don't know why they even bother to discuss this stuff - they're each totally blinded by their own agenda/point of view, and Ridge is maddeningly clueless.

Right now.
As ludicrous as it was for Katie to sneak out of the hospital and return with enough energy to ream her husband out, I was loving her stance on the whole mess. She doesn't want Bill to stay with her out of pity and she was no shrinking violet about confronting him and asking him to make his choice - refreshing!

The wrong idea.
I think it's kind of poignant that Amber has discovered she has feelings for her baby daddy. Of course she'll have a long way to go to convince him that she's worthy of a relationship, and going after Dayzee probably isn't going to be the right way to start... As for Dayzee, I'm suspicious of her sniffing around Marcus so soon after Thomas disappointing her - it's like he's the runner-up, and if Thomas redeems himself, she'd probably go back to him. Who do you think Marcus should be with? Let us know by voting in Soaps.com's The Bold And The Beautiful Snap Poll: Match Up Marcus.

If you haven't already, check out The Bold and the Beautiful Weekly Blog. Join us on Twitter @soapoperafan and Facebook. Come tweet and Facebook with us about "The Bold And The Beautiful," all the other soap operas, "Glee," "Grey’s Anatomy" and "Vampire Diaries!"