Running interference.
I've no words to describe how tired I am of the scenes with Hope and Liam kissing and giggling about what a 'temptation' she is. I'd like nothing more than to see Liam yanked from this teenybopper tale - such a waste. Maybe there's hope for a break-up. After all, what will Hope think of Liam covering up for Bill's infidelity with Steffy? Knowing how highly she thinks of her Aunt Katie, he's really taking his chances. While we're on the subject, I really enjoyed Liam's confrontation with Taylor on Friday.

Moving on out.
I don't know what to make of Jackie and Owen deciding to move in with Nick all of the sudden, other than the loft set was needed for Steffy and Bill's trysts. I was amazed to hear that Steffy purchased the loft fully furnished - Owen and Jackie probably 'christened' every surface in the place! In any case, there will probably be some good comedic moments to be had with Nick, Jackie, and Owen, as long as it's more than just Nick rolling his eyes while they make out. I'd really like to see these characters get a real storyline. 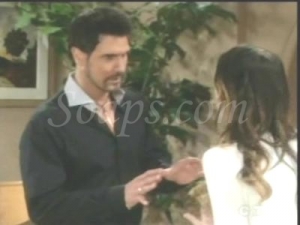 It was a good week of viewing on “The Bold and the Beautiful.” So nice to have a break from Stephanie, Brooke, Ridge etc. Here are my thoughts on this week’s events:

Surprise!
I thought Katie’s surprise wedding vow renewal ceremony was a romantic idea – remember, she had no inkling what her hubby had been up to, so no reason to think he wouldn’t be totally into it. Of course Bill’s guilty conscience made him into a bit of a bear over the whole deal. In any case, you could still sense Bill’s love for his wife, which makes his current dilemma more complex – and that I liked. I also enjoyed seeing Karen, Bill’s sister, return for a brief time. What did you think about Katie’s surprise wedding vow renewal ceremony? Let us know by voting in Soaps.com’s The Bold And The Beautiful Snap Poll: Surprise Renewal.

Dollar Bill, no cents.
Despite having great physical chemistry with Steffy, I’ve lost respect for Dollar Bill over his handling of this situation – you want to be with Steffy? Fine. Leave your wife first, and don’t ask your son to cover for you – smarmy. As for Steffy, she’s doing everything to Katie and Bill’s marriage that she ever accused Brooke of doing to Taylor and Ridge’s marriage – almost to the letter. All she needs to say is that Bill is her ‘destiny’ and the hypocrisy will be complete. I’m dying for someone to point this out to her. On the whole, Bill and Steffy are hot stuff together, but I’m not convinced there is more there than infatuation on either of their parts. Also, the more pouty and childish Steffy acts, the more difficult it becomes to take her seriously in an adult relationship. It will be interesting to see how things turn out.

The Bold And The Beautiful Spoiler Video: Taylor Speaks Out