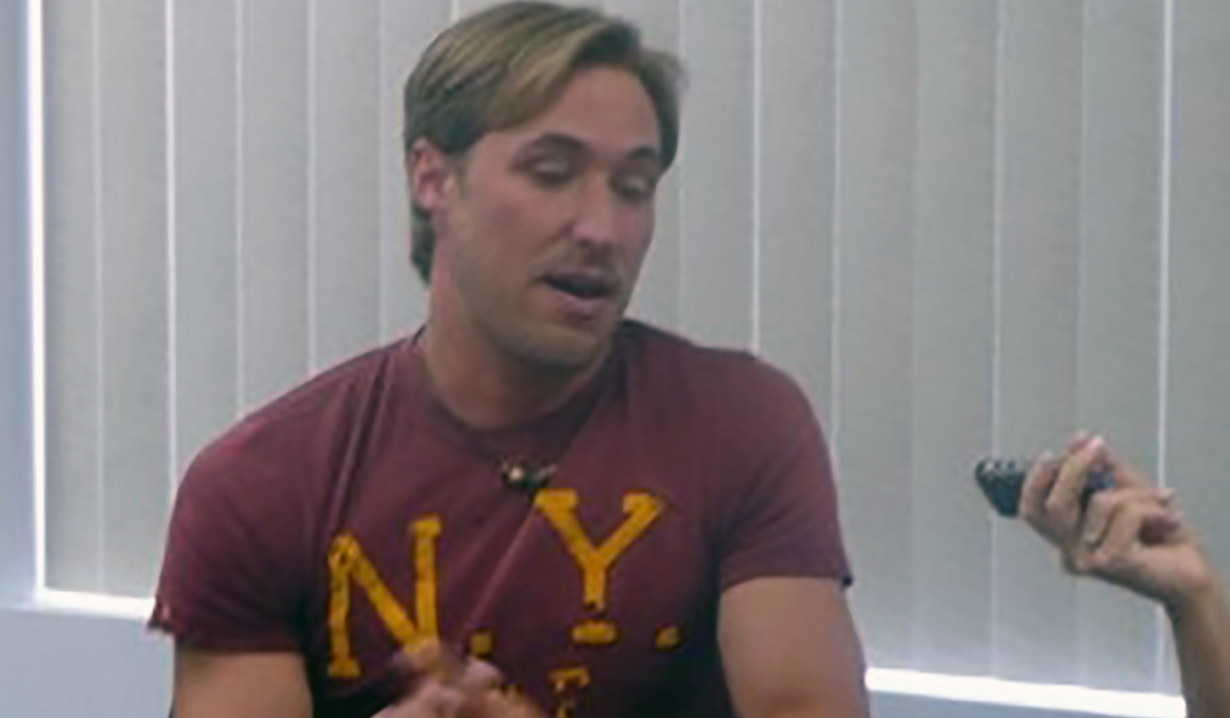 Welcome back Soaps.com readers! Now that you’ve
all had a chance to read Part I of Soaps exclusive interview with B&B’s Kyle Lowder, it’s time to re-join Kyle as he dishes about his former daytime role, his character Rick’s relationship, and his hopes for the character down the road. Enjoy – these are your questions answered!

Candace: What is it like working on The Bold and the Beautiful as opposed to Days of Our Lives? Do you miss working with your wife? Do you keep up with what is happening with Brady? (Kyle formerly portrayed Brady Black, while wife Ari currently plays Nicole Kiriakis on Days of Our Lives)

Kyle: “I do miss working with my wife, and I don’t. We talk about that a lot. For the first part of the question, they are two totally different places to work. At Days of Our Lives, there’s so much nostalgia there for me. I started there when I was 19 years old and so naïve and new to Los Angeles, not just to the business. It was a new world to me, because I’m a New Yorker, and it was just crazy coming to L.A. So I had so many ‘firsts’ in life on that show. It’s weird, I go back and visit the set and there are so many sights and smells that bring back a rush of memories, that place is always going to be so close to my heart. It’s kind of like that ‘first love’ deal – it’s always there in your head! The format for how they shoot is very similar, so that’s not really a change. It’s just different places, different faces. One is not better than the other, but I’m a little biased toward ‘home’. I didn’t keep track of what the ‘Brady’ character was doing until my wife started back on the show and I started watching it. They talk about that character a lot! Maybe they’re keeping him alive to do something drastic – I hope not! Hearing them talk about the character makes me want to get back and do it!

Candace: Would it be weird for you it they were to re-cast the role of Brady?

Kyle: Yeah, it would be. Not in a bitter way, it’s just when you invest so much life and time and effort and passion and heart & soul into something, you feel that it should be a certain way. It’s human nature, you know, it’s like, ‘I worked so hard and created this…’ And it’s no disrespect to anybody that would be coming in and doing their own thing, because I’m a re-cast on The Bold and the Beautiful, so I can definitely see it from both sides – I’m sympathetic to both sides. For me, watching someone come in, it would be like watching someone root around in your stuff! ‘Get away! This is mine!’ But if they have to tell a story and I’m not available, then they have to tell a story, and I, of all people, respect that. I’m not saying it would be easy to watch, but you gotta’ do it.”

Candace: Back to B&B, will Rick and Taylor will make it to the altar?

Kyle: “I don’t know! Brad is being very ‘coy’ about that! I ask him all the time and he’s like, ‘Stop asking me that.’ I’m surprised the fans have been so supportive of Rick and Taylor – it’s such a controversial situation. I like the relationship because, the little I know about the history of B&B, is that Brooke has always gotten to Taylor. She’s always won, always had her right where she wants her, and now Taylor finally has Brooke. She’s got her baby back, Brooke can’t legally touch him, and now Brooke’s son is in love with her, and she’s in love with him – and it’s legit. Brooke can’t seduce him away like she has the other husbands and boyfriends – she can’t lose him to Brooke. Taylor wins, Brooke loses – and Brooke’s going crazy! I love watching Katherine Kelly Lang play the role of Brooke when this is going on because it’s so funny, she’s like, ‘It’s sick! It’s a sick relationship and she’s crazy!’ Sometimes, I’m watching Kelly do her thing and it’s back to me and I’m like, ‘Oh. Sorry.’ I’m so enthralled with what she’s doing! But that’s why I like the relationship, because it is a legit love – it was written that way from the beginning. I love the fact that it’s so real, and that Taylor has finally got Brooke right where she wants her!”

Candace: Our readers are anxious to see what happens when Phoebe finds out!

Kyle: “That, I do know what happens. That’s catastrophic! That’s huge. I like that, that was a good one! But we haven’t really got beyond that yet.”

Candace: Do you think Rick is more like Brooke or Eric?

Kyle: “Brooke. Without a doubt. Although Eric’s behavior lately is a little bit questionable – Eric’s pulling a ‘Rick’ in the sense of Eric’s going after Donna, the way that Rick went after Phoebe. But Rick’s a chip off the old block on Brooke’s side of things because he’s very reckless with his emotions. He wears his emotions on his sleeve. Brooke goes through life and when she becomes passionate about something, she doesn’t think about the consequences, she just goes after it. Rick is kind of that way – he doesn’t think about the consequences, he just got together with Phoebe, knowing full well that they thought they were related their entire lives and now they’re not, so he’s like, ‘I love you, and we’re going to be together.’ Then that didn’t work out so he was passionate about Ashley for a little bit, so now it’s, ‘I love you Taylor. You’re hot.’ So he’s very impulsive. Not recklessly in the sense of being dangerous, but at the same time, he’s just a little careless. Carelessly impulsive. He doesn’t think about the fact that he is in love with a woman who is the mother of a woman he’s dated! It’s a little bizarre. So he’s a lot more like Brooke in that sense. Eric has always been, up until now, more stable, something Rick needs. I like that he’s written more like Brooke, though, it’s more fun!

Candace: What would you change about Rick if you could?

Kyle: “Based on everything we just said, I would maybe give a little bit more of a filter. Maybe if for once he would care about the consequences of what he’s doing. Put a little bit of a filter on his emotions! I would like him a little more thoughtful in terms of the decisions that he makes.”

Candace: Is there anyone else on the show that you would like to see Rick interact with?

Kyle: “John McCook (who plays Eric, Rick’s dad) and I were talking the other day about the fact that there haven’t been very many Rick and Eric, father/son scenes. Through all this tumultuous situation with Taylor, and Phoebe and Ashley before that, Rick never even had a talk with his dad. I would like to establish that relationship a little more. My character Brady on Days had a very strong relationship with his dad, which I thought really rounded the character out. With Rick, I think the father/son relationship is missing a little bit.”

Candace: Where do you see Rick in the long-term, two or three years down the road?

Kyle: “I always want to see him in an unstable situation because that makes my job a lot more fun. In the immediate future I would like to see how his relationship with Taylor turns out. It’s B&B, so obviously it’s not going to last, but I want to know what happens! I’m excited to see where this goes!”

Netflix's Away Cancelled After 1 Season