Forrester fun.
How great was it having Thorne and Felicia back on our screens so much this week? Thorne complaining about how dysfunctional they are, Eric preparing to 'tie one on', Felicia ranting about 'mother'... Loved it! I wish they'd keep them on.

What about me!
One thing that did not work for me on any level this week was Steffy's reaction to the news that Ridge would not be marrying Taylor. Being spoiled and immature is one thing, but this girl needs serious psychiatric help! In what universe does a twenty-something, well-traveled businesswoman throw a self-centered hissy fit like a 12 year-old adolescent? Even when Ridge pointed out, quite reasonably, that she doesn't even live at home, and that there was young RJ to consider, she still could only cry and sob, "What about me!" Even more bizarre was her telling her mother and Thomas that it was 'their turn' to have Ridge back for a while. What?!

Captivated.
I didn't see one captivating thing about Steffy this week, but Bill's entitled to his own opinion. I was so turned off by her astoundingly childish behavior that I couldn't even get into the heart-pounding chemistry between Bill and Steffy on Friday. As far as Bill goes, his actions just make me feel bad for Katie, who is planning a surprise for him while he canoodles behind her back. I think Bill should leave Katie first before dallying with Steffy if that's what he wants to do. Bill's putting Justin in a bad position as well - I'm hoping that will come up. 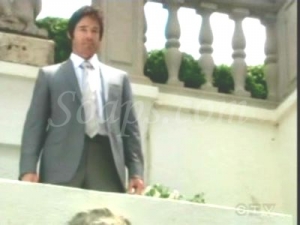 Credit: What about me! (Soaps.com)

“B&B” was much improved for me this week. There was some romance, comedy, and conflict. Let’s take a look at what happened:

Romantic reunion.
Ridge appearing at the top of the fountain and dropping the rose petals into the water to get Brooke’s attention was classic soapy romance. I’m not saying it was worth the ridiculous storyline it took to get there, but it was definitely a ‘moment’.

Keep it coming.
I was loving the strength of both Taylor and Dayzee this week in the aftermath of Stephanie and Thomas’s deception – here’s hoping they stick to their guns!

Facing Brooke.
I enjoyed seeing Thomas and Stephanie each having to face up to Brooke. Thomas’s betrayal was worse because of the bond they shared – she couldn’t even imagine that he would lie about such a thing even when certain people were suggesting it. On the other hand, Brooke didn’t even seem surprised to learn that Stephanie had a hand in it. Brooke is so happy to have Ridge back, and to have received a sincere apology from Stephanie, that she could afford to take the high road when doling out the punishment. I thought it was a very interesting choice to take a comedic route and have Eric and Stephanie doing shots and Stephanie professing her love for Brooke in front of a live audience. What did you think about Stephanie’s penance? Let us know by voting in Soaps.com’s The Bold And The Beautiful Snap Poll: Anything?

The Bold And The Beautiful Spoiler Video: Where Steffy Turns

The Bold And The Beautiful Saturday Teaser Poll: Steffy And Bill