Hopeless?
Hope shows real promise when she expresses her opinions and argues with someone - she really holds her own and I like it. But then she pulls this hearts and flowers routine with Liam and she becomes a character that irritates me. How many hundreds of times has she made out with this guy, told him she loves him forever, and then put the brakes on? She did it with Oliver too. It's just gotten old. The gooey Hope and Liam scenes, at this point, just drive me around the bend and don't seem to belong in the real world. What's worse, is that other characters who get pulled into it, such as Dollar Bill, also seem out of place back-slapping, hugging, and generally frolicking in the saccharin sweetness of it all. How do you feel about Hope these days? Let us know by casting a vote in Soaps.com's The Bold and the Beautiful Snap Poll: Hopeless?

Another strong Logan woman.
The scenes with Amber and the Logan sisters really had me pulling for her to get it right this time. I think as long as Tawny's out of the picture she'll be able stay on solid ground. I'm really liking the idea of her and Marcus as a couple too - they're playing the heck out of the happy parents vibe - loving this! See what Marcus's portrayer, Texas Battle, has to say about the storyline through Soaps.com Interviews The Bold and the Beautiful’s Texas Battle. 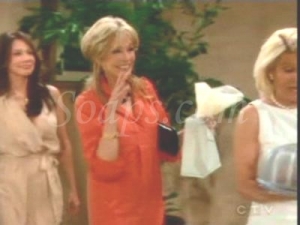 It’s been a long week for those of us who are not fans of the ‘deception’ storyline which is currently dominating the canvas. It was nice to see Thorne, Pam, and Jackie this week though. Read on for the breakdown.

What a debacle.
I don’t understand where one single character is coming from in this absurd storyline involving Stephanie’s master plan. It never made sense for her to turn on Brooke, it didn’t make sense for Thomas to go along with it, and Brooke’s sudden hero-worship for Stephanie is strange considering she was recently ‘done with her games’. Taylor wanting Ridge as a consolation prize doesn’t work, nor does having Steffy act like a six year-old over getting her parents back together. People getting divorced and remarried in a week? Stupid. Sure there have been some good scenes and some intense moments, but if we had to reignite the Brooke/Stephanie rivalry I would have much preferred it to have been over something believable so I could truly get invested. Actually, my initial statement was inaccurate – I can relate to a couple of the characters, such as Thorne, who angrily remarked on how crazy it all sounds, and Dayzee, who is demanding that Thomas straighten up and fly right – great scene with her and Stephanie!