Soaps.com Interviews The Bold And The Beautiful’s Texas Battle

Soaps.com: Donna and Justin also have to cope with the idea of Amber as the mother of their grandchild.

Texas: And that’s one thing Donna is having trouble with; the fact that she’s young and she’s a grandmother already. Nobody expected this at all; it was a shock to everybody, including his dad (Texas explains that Marcus calls Eric ‘Dad’ and Justin ‘Pop’). The other day Hope (Kim Matula) was like, “Marcus? What?” And Oliver (Zach Conroy) – because [Marcus] was sleeping with Amber and Ollie didn’t even know. They’re all like, “Wow, where did this come from?”

Soaps.com: So, Marcus is becoming a bit of a family man and we’ve seen him in business too. Would you like to see that side of his character developed more in the future?

Texas: I think Marcus has more potential in business, definitely. I mean, if they trust him to go look up on things on the International line and take over some of Rick’s position when he left, then yes. Not so much in the fashion, like making suits and being a designer; I don’t think that’s Marcus’s niche. Marcus wants to be more in the business and finance; dealing with big shipments; he’d love to be head of shipping for International and L.A. ‘Head of Shipping’ - that’s a good title.

Soaps.com: Do you have any other projects on the go outside of “B&B?”

Texas: We have a new, scripted TV show with MTV – just finished that. It’s a new series called “Death Valley.” That’s going to be coming out at the end of August. It’s an action/comedy/horror about UTF [Undead Task Force] cops. I play a cop named ‘John-John Johnson’, and we go around the valley protecting humans from vampires, zombies, and werewolves. It’s shot documentary-style like “Cops.” There are rules, you’ve got to follow rules because they all live amongst each other now. If you’re a werewolf, you can’t just turn into a werewolf whenever you want to; if you’re a vampire you can’t go and suck on people’s blood; if you’re a zombie then you’ve got to go, because zombies can affect you with their disease and things like that, so we kill them.

Soaps.com: So you were able to do both “Death Valley” and “B&B.”

Texas: Yes, I was. They were very nice and let me do both, and then coming back to the show is always a blessing. I’m also off doing a movie called “Turning Point.” I’m going to start shooting that in July for a good month and a half. That will come out probably sometime next year in 2012.

Soaps.com: One of our readers, username JoePitt, has this question, “Texas, you look like you are in really good shape. Do you think you could take Thomas (Adam Gregory) in an arm wrestling match both right and left-handed?”

Texas: To my fan Joe - I will take Thomas left-handed, right-handed, left-legged, right-legged, bench-press, it doesn’t matter – anything! I will destroy Thomas. That’s easy. Thomas has a swimmer’s body, Marcus has a football body – I will crush him! [laughs]

Soaps.com: Do you have any tips for staying in great shape?

Texas: Definitely working out, but I like running. Running is key, or swimming, and playing basketball – I love those three types of cardio. I don’t lift that much anymore; maybe like three times a week. I only eat junk and whatever I want to eat on Sundays; during the week I’m pretty safe; I don’t eat bread or anything like that. That’s what I do.

Check out the trailer for "Death Valley" through The Bold and the Beautiful’s Texas Battle In Death Valley. Join us on Twitter @soapoperafan and Facebook. Come tweet and Facebook with us about "The Bold And The Beautiful," all the other soap operas, "Glee," "Grey’s Anatomy" and "Vampire Diaries!" 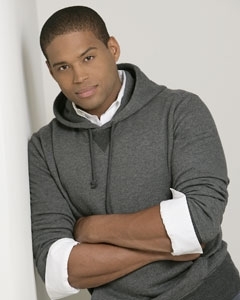 Soaps.com recently caught up with busy actor Texas Battle, to chat about his character Marcus’s rivalry with Thomas (Adam Gregory), his feelings for Dayzee (Kristolyn Lloyd) and Amber (Adrienne Frantz), and his complicated family ties. Read on!

Soaps.com: What was it like playing the tension between Marcus and Thomas over Dayzee, and would you like to revisit that at some point?

Texas: Thomas and Marcus were friends, they got along, it’s just the fact that at that time, when Marcus was talking to Dayzee and getting to know her – he took an interest first – Thomas, at that time, was taking an interest in Summer, he was taking an interest in Madison, and Marcus knew all this. So, all of the sudden Thomas became interested in Dayzee when he knew that Marcus was, because he asked if they were serious. [In character] “It doesn’t matter dude, I’m talking to her!” Thomas knew Marcus was going to Paris. It became one of those rivalries where Marcus thinks Thomas is doing everything sneaky and conniving; he knows Marcus isn’t going to be around to defend his honor. In all honesty, Marcus is sick and tired of this – we all know what happened when he left the love of his life, Steffy (Jacqueline MacInnes Woods), with Rick Forrester (Kyle Lowder) – so he wasn’t going to sit there and let this happen again. Now, Marcus is back. Has he forgiven Thomas for what he tried to do? To a certain point. Marcus is dating and doing his thing. As far as revisiting the Dayzee scenario – yeah, why not? Marcus doesn’t want to be with Amber. He doesn’t have that type of relationship with Amber. The only reason Marcus was talking to Amber, being honest here, is that it was that time – he needed to get it in.

Soaps.com: Some people were surprised to learn that Marcus was sleeping with Amber because he seemed to be serious about Dayzee.

Texas: Marcus was all about Dayzee; he was talking to her, he wanted to get to know her, but she denied Marcus’s offer to take her with him to Paris and accepted an offer to go to San Francisco with Thomas – the same day! So Marcus was like, “What? Really, you’re going to do that? Okay, I see how it is. So, I guess we’re not together. There are no rules right now. So, fine, you do you, I’m leaving for Paris anyway, so I’m going to do me, and when I come back we’ll see what’s good.” That’s basically where it’s at.

Soaps.com: After the scenes in the hospital, in which Marcus and Amber are so happy with the baby, there are viewers hoping to see a relationship develop between them as they parent their child. Can you imagine that happening?

Texas: At this point, Marcus doesn’t trust Amber. Do I see something in the future with Amber? Who knows? Would he like for Amber to change her ways a little bit? Yes. It isn’t that Marcus doesn’t like Amber – he does like her – he protected her when his [parents] were talking about her. If she can change her ways, which I think that she slowly is, and if Dayzee is still hooked on Thomas and not going back and forth – because Marcus is not going to get played – yeah, Amber could possibly be a good fit for Marcus.

Soaps.com: Justin (Aaron D. Spears) asked Marcus, again, about taking his last name, yet Marcus paid a visit to Eric’s (John McCook) office to ask him about giving Amber and the baby the Forrester name. What’s going on there?

Texas: It’s a tricky situation for Marcus. He just found out who his father is and they really don’t have a strong bond yet. We see a closer bond between Liam (Scott Clifton) and Dollar Bill (Don Diamont) than between Marcus and Justin. To me, you can’t have Marcus want to change his name to Barber when there’s no father and son connection yet. Marcus is like, “Look, Eric Forrester adopted me. He accepted me as his son, he made me a Forrester because of who I am, not just the fact that he was married to my mom, but because of who I am as a person.” That means a lot to Marcus. He loves Eric with all his heart. He grew up without Justin for years; he hasn’t had a father figure besides Eric.

Soaps.com: How will it affect Justin and Marcus’s relationship when Justin finds out Marcus is not only keeping the Forrester name, but wants to give it to Amber and the baby?