Actor Texas Battle Joins The Bold and the Beautiful Cast! 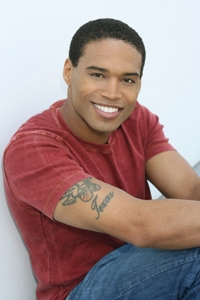 Soaps.com has received word from The Bold and the Beautiful, that actor Texas Battle has joined the cast in the contract role of “Marcus”.

Texas Battle Update! The character “Marcus” will first appear on May 13th – mark your calendars!

According to Bradley Bell’s press release, “Marcus books a flight to Los Angeles after seeing the wedding announcement of Eric and Donna in the local paper. He arrives on the scene at a time when the Forresters and the Logans are embroiled in deeply emotional issues. It is soon revealed that Marcus is connected to the Logans, and a secret that Donna has been keeping since she was a teenager.”

Texas Battle has been a busy participant in the entertainment business! His previous credits include “Final Destination 3”, “Coach Carter”, “Wrong Turn 2”, “12 Miles of Bad Road”, “One Tree Hill”, “The Bernie Mac Show”, “The Parkers”, “Committed”, and “All of Us”. Additionally, he recently completed work on a supporting role in “Dragonball” for Fox Network, and also just wrapped the feature film, “Even Money”, opposite Nick Cannon, Kim Basinger, Forest Whittaker, Ray Liotta and Kelsey Grammer!

Born in Houston, Texas, the actor is a graduate from the University of Texas, majoring in Kinesiology. Upon graduation, he worked as a substitute teacher, before following his dream of becoming an actor and heading to Los Angeles. Texas is currenly single and enjoys spending time on the beach, working out, playing basketball and working on his rap music!

Soaps.com would like to welcome Texas to his new role on The Bold and the Beautiful ! We can’t wait to see how Marcus will stir things up for Donna, as if Pam isn’t enough to contend with! Watch Comings and Goings for an update on Texas’ first airdate!

The Bold and Beautiful's Deacon...