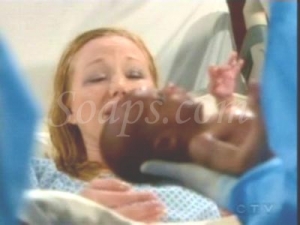 Well, we’ve certainly had some excitement and romance this week, but some are saying it’s just one too many times around the mulberry bush for Brooke, Ridge, and Taylor. Here are my observations on the past week’s episodes:

You are not the father!
The paternity twist with Amber’s baby, although fairly predictable, was definitely entertaining. Especially since the beats were played so nicely; Carl grimacing as Amber delivered, Bill giving Justin back his cigar, Tawny asking Bill if he thinks they’re stupid, etc. It was an unexpected bonus to see Marcus’s happiness and the chemistry between him and Amber as they took in the sight of their new daughter – this could be the start of something!

What’s in a name?
It looks like something interesting is brewing what with Marcus wanting to give Amber and the baby the Forrester name as opposed to the Barber name. Can you say family conflict?

Cabin chaos.
Even if you find saccharin-sweet duo Hope and Liam gag-worthy, you couldn’t help but enjoy their reunion. I also liked how Oliver was forced to come clean about sleeping with Amber, although his character seems faintly ridiculous now.

Now for that other storyline...
I don't know where to start with the Brooke/Ridge/Taylor/Thomas/Stephanie mess. The level of ridiculousness hit the stratosphere this week. What woman tells the man she loves to go back to his ex-wife? What man does exactly what all the women in his life tell him to do like a big dumbass? What man walks away from one marriage and five seconds later proposes to someone else? And will someone please explain to me why Taylor would take Ridge back when he stands there holding the engagement ring and referring to Brooke as the woman he loves! What a fiasco. Thomas is an idiot for listening to Stephanie, but it's Stephanie who takes the cake. After her life-changing experience with cancer and the homeless, it is unfathomable that she's hit such a new low. The last straw for me was her rushing over to gloat to Brooke that Ridge had proposed to Taylor and then shaking her head at having to deal with the inconvenience of Brooke's pain. Yech. I can't understand why they chose to do this to Stephanie's character at this point. I guess they want us all to be on pins and needles waiting for the truth to come out, and that part is certainly working. How would you like to see the secret revealed? Let us know by voting in Soaps.com's The Bold and the Beautiful Snap Poll: The Big Reveal.