Marie Osmond To Join The Bold And The Beautiful?

Read more recent casting news through The Bold and the Beautiful: Terry Pheto Joins Cast. Join us on Twitter @soapoperafan and Facebook. Come tweet and Facebook with us about "The Bold And The Beautiful," all the other soap operas, "Glee," "Grey’s Anatomy" and "Vampire Diaries!" 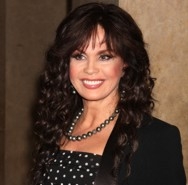 Marie Osmond spoke out about an upcoming gig last night at the Daytime Emmy Awards – she’s taking a role on “The Bold and the Beautiful!” Marie confirmed to HitFix, “I’ll be on the “Bold and the Beautiful.” I can’t say what I’ll be doing though. Except mixing it up a little.” Numerous published reports also mention her appearing in scenes with Adam Gregory, who plays Thomas Forrester. Marie explained to press that Adam is married to her best friend’s daughter.

Marie has not taped her scenes yet. Soaps.com will keep readers advised of her air dates when the information becomes available. Are you excited that Marie will be joining “B&B?” Let us know by voting below.

The Bold And The Beautiful Saturday Teaser Poll: Strange Reaction

The Bold And The Beautiful Video Promo: Donna Learns She's A Grandmother