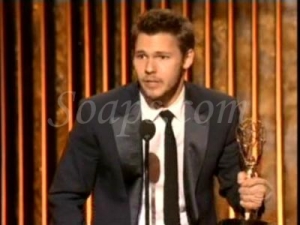 “The Bold and the Beautiful” was recognized time and again last night at the 38th Annual Daytime Emmys. Heather Tom won the Outstanding Supporting Actress Emmy for her portrayal of Katie Logan Spencer. She looked amazing in her white gown, and was breathless as she took the stage to give her acceptance speech.

Scott Clifton, who plays her stepson, William Spencer III (Liam), was also honored last night. He took the Emmy for Outstanding Younger Actor and appeared to be genuinely taken by surprise by the win.

“The Bold and the Beautiful” also won for Outstanding Directing Team, an honor they shared with sister soap, “The Young and the Restless,” and finished up by winning the biggest honor of the night, Outstanding Daytime Drama Series.

Congratulations to “B&B” on all of their Emmys. Check out what they won at the 38th Annual Creative Arts And Entertainment Emmy Awards.

Did you see Heather, Scott, and the cast accept their awards last night? Let Soaps.com know by voting below.