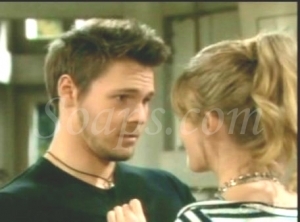 Nothing is too much to ask.
Hope tells Liam that being a stepmother to Amber’s baby isn’t too much to ask – nothing is – as long as they can be together. Can someone explain why this wasn’t her attitude from the beginning? Gah! Why would Liam think that she would want to experience her ‘first time’ on the sofa where Tawny and Amber scarf potato chips? Romantic.

He’s lying.
If James and Hope can figure out that there is something extremely fishy about Thomas’s confession, why can’t Ridge? Especially with mommy dearest smack dab in the middle of it all – should be a big clue that something is up. It’s unrealistic that Brooke is suddenly clamoring to kiss Stephanie’s behind, when just a few weeks back she told her she was tired of her games. How about that Thomas, figuring out about a week too late that he actually didn’t need to lie – he stands to inherit the company anyway. The dumbed down characters get on my nerves. I loved the scene where Hope confronted Thomas.

Clueless.
Wow, wait until trusting Dayzee finds out what kind of deviants she’s dealing with in her great pal, Stephanie, and hottie boyfriend, Thomas. I thought they should have been ashamed to even share her airspace this week. But why would she confide in Marcus about Thomas – would never happen in real life.

Bad move Bill.
I found it a bit of a turn off that Bill would even consider hiring Steffy, who throws herself at him every chance she gets, and whom he shared a dalliance with behind his wife's back. It seems super disrespectful to Katie - if he is, in fact, trying to salvage his marriage. I love the spice Steffy brings to scenes, but would like to see Katie get the better of her under these circumstances.

Office antics.
I got a kick out of a couple of the scenes in the offices at Jackie M this week. When Nick and Whip bet on whether or not they'd catch Owen and Jackie kissing, and the scene where Whip growled as he suggested they bring back their 'cougar'. Nick's eye-rolling and dubious expressions are hilarious. Do you enjoy the antics at Jackie M, or do you wish the characters would get more substantial storylines? Let us know by casting a vote in Soaps.com's The Bold And The Beautiful Snap Poll: Jackie M.