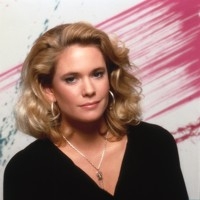 At the request of some Soaps.com readers, we have decided to focus on one of the most special past heroines of The Bold and the Beautiful as it celebrates its 21st year on air! When the show first began, playboy Ridge Forrester (Ronn Moss) was in love with, and preparing to wed, the beautiful Caroline Spencer (Joanna Johnson). Ridge was the son of Eric (John McCook) and Stephanie Forrester (Susan Flannery), and was not only a fashion designer, but also vice-president of Forrester Creations. Caroline was the daughter of media mogul, Bill Spencer (James Storm). The upcoming wedding excitement built to huge proportions, as coverage of the nuptials went worldwide on television and in print. Many women read the story of the impending ‘wedding of the year of the fashion world’, including one Brooke Logan (Katherine Kelly Lang).

As Caroline was about to marry Ridge, her father Bill, who didn’t trust Ridge, produced evidence that he had been unfaithful to Caroline since the time of their engagement. Although broken hearted, Caroline seemed determined to go through with the wedding, until she collapsed in the aisle. Ridge’s brother Thorne (Clayton Norcross), who harbored feelings for Caroline, jumped to comfort her.

In her next story arc, Caroline was raped by Ron Deacon (Greg Wrangler), and turned to Brooke for support. A love quadrangle developed with Caroline, Brooke, Ridge and Thorne, and after machinations on the part of Thorne and Brooke to keep Caroline and Ridge apart, Caroline, in spite of carrying a torch for Ridge, decided to marry Thorne. One night, thinking he was her husband, Caroline slept with Ridge. Thorne was devastated when the truth came out and he turned to booze and pills to assuage his pain. In a stupor, Thorne shot his own brother in return for his betrayal with Caroline! Although Stephanie tried to cover up the truth, it eventually came out and Caroline divorced Thorne. After Brooke miscarried Ridge’s child, Caroline and Ridge once again grew close and became engaged to be married.

Tragically, soon after finally marrying her dear Ridge, Caroline found out that she was dying of leukemia. In one of the show’s most poignant moments, Caroline passed away in the arms of her true love, Ridge.

The actress who played Caroline Spencer Forrester, Joanna Johnson, was a young Cybil Sheppard look-a-like, who had previously landed small roles on television series such as "Riptide", "Mike Hammer", and "The Twilight Zone". She had also been in a film entitled "Killer Party". When Joanna heard about the B&B auditions she really wanted to go out for a role on the new soap, but apparently, her agent didn’t agree this was a good career move. The story goes that Joanna persisted, because she knew they were casting unknowns. When her agent told her she couldn’t get her an audition, she switched agents! Her new agent immediately got her an audition and Joanna landed the role.

Joanna played Caroline from B&B's inception in 1987 until Caroline's death in 1990. Months later, Joanna Johnson returned in the role of Karen, Caroline's twin sister, which she played from 1991 to 1994. Joanna reprised the role of Caroline once in a special episode in 2001 as well, when she appeared to Ridge from beyond.

Since leaving B&B, Joanna followed her dreams of working behind the scenes, rather successfully, as she went on to become creator and executive producer of "Hope and Faith". The popular television sitcom ran from 2003 - 2006. Joanna also notably wrote "The Shrink Is In", a film which starred Courtney Cox and David Arquette.

Soaps.com hopes you have enjoyed this trip down memory lane with one of the most popular characters The Bold and the Beautiful has ever had. Best wishes to Joanna, too, on her future endeavors.