The Bold And The Beautiful: Lorenzo Lamas Marries For Fifth Time. (UPDATED!) 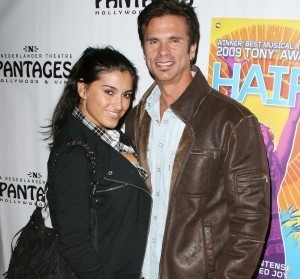 TMZ is reporting that in the spirit of starting fresh after four previous marriages, Lorenzo Lamas will take his new bride’s last name. He’ll be known as Lorenzo Craig.

Actor Lorenzo Lamas (ex-Hector Ramirez, “The Bold and the Beautiful”), who was in talks to do Dancing With The Stars earlier this year, got married to his 24 year-old fiancee, Shawna Craig, this past Saturday April 30 at the Casa Dorado Hotel in Cabo San Lucas, Mexico. According to Rumerfix, Lorenzo’s “B&B” pals Ronn Moss (Ridge Forrester) and Winsor Harmon (Thorne Forrester) were scheduled to attend the nuptials.

Soaps.com congratulates Lorenzo and his new bride. Would you like to see Lorenzo bring his character, Hector, back to “B&B?” Let us know by casting a vote in the poll below.

Watch a clip from Lorenzo's reality series, Leave It To Lamas. Join us on Twitter @soapoperafan and Facebook. Come tweet and Facebook with us about "The Bold And The Beautiful," all the other soap operas, "Glee," "Grey’s Anatomy" and "Vampire Diaries!"