Stranded.
Brooke's designer dress barely made it onto the island after the plane crash - luckily her undergarments held up nicely! All kidding aside, the scenes on the island have been fairly realistic to watch, although I will admit to being a little puzzled as to why 'eagle scout' Thomas didn't think to make a fire outside the cave so potential rescuers might see the smoke - or write a giant SOS in the sand for planes to spot. In any case, most viewers thoroughly enjoyed some speculation about the weird looking berries. Eventually, Brooke ate some, and then offered them to Thomas like Eve with the apple. After Thomas gave in to 'temptation', the ensuing bizarro hallucination scenes were a totally unexpected treat - anybody else want some of those berries?

Did you find any of the characters particularly ridiculous this week? Let us know by voting in Soaps.com's The Bold And The Beautiful Snap Poll: Most Ridiculous. 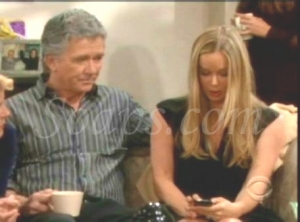 The all-encompassing storyline this week was the search for Brooke and Thomas after their jet went down over the Pacific Ocean. Let’s take a look!

Word spreads.
For some reason I’m always highly entertained watching Ridge in super-serious situations. His grim determination and macho posturing pleases me to no end. I also loved Eric’s reaction to the news of the tragedy, stating in true airhead fashion, “It’s a big ocean out there.” No kidding! The reactions of the women were all highly predictable – Stephanie launched into stern leader mode, the Logan sisters sobbed and wailed, and Hope accepted comfort from a male, in this case, Liam. I wasn’t impressed with her asking him to pretend they were still together – talk about yanking the guy’s chain! Anyway, it was nice that we also got to see reaction from Dayzee, including her sharing scenes with Stephanie since it’s been a while. Stephanie’s recognition of her love/hate relationship with Brooke was good stuff. I also enjoyed Stephen and Pam returning to the canvas. Welcome back.

The search.
If it was any other man but Dollar Bill Spencer acting so pushy and arrogant I’d be repulsed, but somehow, Bill wears power and dominance well. So maybe we can’t really blame Steffy for being turned on by him, even though her brother is missing and could be dead – or can we? I don’t know what to make of her flirting at such a crucial time, but it’s definitely uncomfortable. So much for Taylor talking to Steffy about going after Bill – she sat there and watched while Steffy curled right up beside him with her hand on his knee during the flight! It would be hypocritical anyway since Taylor wants Ridge and he’s married. Getting back to the search, I got a kick out of Ridge renting a fishing boat to search the ocean – too funny. As for Nick weighing in with his expertise, it’s totally far-fetched that he would have worked in the exact waters where the jet went down (it’s a big ocean out there!), but I’m willing to suspend disbelief for the sake of the story. Go Nick!

The Bold And The Beautiful Video Promo: Nick Joins The Search

The Bold And The Beautiful Saturday Teaser Poll: Surprising Suggestion