We need to move forward - again.
I've lost track of how many times Hope has told Liam he needs to be with Amber now; it's been the same conversation repeated over and over. While this might be realistic, just like mooning over pictures on the laptop, it's tedious viewing. Can we please move forward for real this time? And what's up with Hope telling Liam she has decided to move on with Oliver? If she still loves Liam, shouldn't she stay single? I guess she needs to be with someone at all times. Yeeps. Bottom line - this storyline is making me dislike the characters.

Silly rivalry.
I have no idea what that whole scene was about with Tawny asking Hope to set aside her silly rivalry and become friends with Amber - made no sense to me at all. Bizarre.

Step back Steffy.
It makes me laugh to think how shocked Steffy would be if anyone pointed out to her how much like Brooke she's behaving by getting all up in Bill's personal space - he's a married man.

No negotiation.
Bill's hard-nose routine is more of a threat to his marriage to Katie than Steffy's machinations. This storyline works because Katie feeling so torn, and being pulled in one direction by her sisters, and another by Bill, is emotional and realistic. Bill struggling to want to make things right with the woman he loves, but being unable, and unwilling, to let down his carefully built walls is also compelling. I'm into it. Of course some say Katie should just walk away - he plotted a murder after all, but what fun would that be?

I'm wondering what Liam's reaction will be when he learns about Bill's plot to 'off' Amber - they might not be such a cozy father/son duo after that. Let us know what you think Liam's reaction would be by voting in Soaps.com's The Bold And The Beautiful Snap Poll: Liam's Reaction. 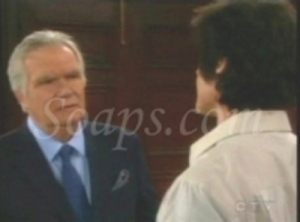 It was a shocking day in the soap opera world yesterday, as it was announced that All My Children and One Life To Live will be canceled. I’d like to think that wouldn’t happen to “The Bold and the Beautiful,” which has given us such memorable rivalries, love matches, glamour and drama over the years.

There are still many reasons to tune in to “B&B” although viewers seem to be unimpressed with some of the recent storylines. It’s true; the show’s writing tends toward the old-fashioned, with long-held significant looks and repetitive dialogue, and is also criticized for pushing the envelope with questionable storylines such as Thomas having a ‘thing’ for his stepmother. However, the recent homeless storyline, which featured the history-laden dynamic between Stephanie and Brooke, the Forrester family melee in Ridge’s office this week, and the charismatic scenes between virile Dollar Bill and his women, are just a few examples of what is still so great about “B&B” and the genre itself. Perhaps a few tweaks to modernize the writing is what “B&B” needs; today’s attention spans are shorter, and the old school pacing has a slow, slightly ridiculous feel – more stimulating dialogue and a brisker pace might be something worth trying. Let’s take a look at the past week:

Forrester meeting melee.
Wow, it was great to see Pam, Thorne, and Eric this week. I especially enjoyed seeing Eric back in the thick of things, and the whole gang weighing in on the latest Forrester Creations controversy. These are the type of scenes I love to see on “B&B.” Now all they need to do is realign the players at the rival fashion house, Jackie M, and get some backstabbing and intrigue going. I miss the days of Sally, Clark, and Spectra.

Thomas trouble.
Greedy, spoiled Thomas will use the shares Ridge just offered to try and undermine his decision about Taboo. Brat. As for his renewed dalliance with Dayzee this week, I found that I liked them together. That said, it might just have been relief that he is still into her after his recent close encounters with Brooke. In any case, the scenes where Summer interrupted Thomas and Dayzee were kind of interesting – I’d like to see that girl stir the pot a little.

The Bold And The Beautiful Video Promo: Steffy Manipulates

The Bold And The Beautiful Saturday Teaser Poll: Unexpected