Get your hands off my woman!
Ah, that Bill is so primal isn't he? This stuff with Bill, Nick, and Katie was the only thing even mildly catching my attention this week. Of course Bill was a buffoon to slug Nick, but this is a love triangle I could get into. Of course, Steffy would be in there as an antagonist as well, trying to seduce Bill at every opportunity (how hot was her attempt on Friday's episode!). The only aspect that niggles at me is the premise for Katie's issues with Bill, which is Bill's unrealistic attitude toward Amber - would he really think she was trying to kill Liam? Would a man with his supposed power and connections really resort to murder - and try to do it himself? I guess if he didn't, there wouldn't be conflict between him and Katie, so we'll have to deal. Anyone else up for a triangle? Let us know who you think Katie should be with by casting a vote in Soaps.com's The Bold And The Beautiful Snap Poll: Love Triangle.

Like father, like son.
The Liam and Bill scenes this week were spot on - they've got a great dynamic going with these two.

Made for you.
Okay, Thomas leering over Brooke this week made me cringe, and feel a little sick. I also felt like slapping Brooke for constantly getting up close to him whenever they talked - would you really do this if everyone were suspicious of you to begin with? Argh! Controversy in a soap opera storyline can sometimes get people talking, feverishly debating, and tuning in to see what happens next, but there's nothing to debate in this particular case - it's just a turn-off. I like the conflict between Ridge and Thomas, but I think it would be enough to have them at odds over business without the Brooke factor. 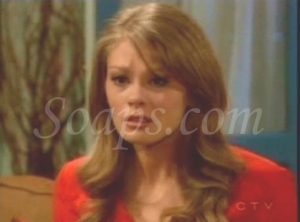 I’ve been trying to be a good sport about this – you can’t expect a soap to have compelling tales like Stephanie and Brooke’s homeless storyline every week – but frankly, the show has had me shaking my head for a bit now, and this week did nothing to improve matters. Here are my thoughts on this week’s main stories:

Hopeless.
Yes, that’s what they’re calling Brooke’s daughter on the message boards, and it could just as easily refer to the storyline itself. What on earth makes the writers think that viewers are interested in having the show dominated by a teenager whose sum total of life experience is growing up rich and sniveling over boys who have cheated on her? Sure she’s cute and nice, but she’s not witty, savvy, or interesting in her own right; she hasn’t pursued education or traveled, and isn’t emotionally ready for an adult relationship, so she shouldn’t be front-burner. Side-burner, maybe. Not to mention that her storyline with Liam has practically been a repeat of her previous one with Oliver – and no one cared much the first time around. Why is this character being featured so heavily when we don’t get to see Thorne, Felicia, Eric, Stephen and Pam, Bridget, or Jackie hardly at all? I just don’t get it.

Would you be mine, could you be mine?
Oliver, whose cardigans and button-downs have him being referred to as ‘Mr. Rogers’ by some viewers, tried to ‘roger’ poor Hope right when she was at her most vulnerable – maybe he’s not the nicest guy in the neighborhood after all!

The Bold And The Beautiful Saturday Teaser Poll: Heated Exchange