Too soon?
I have always thought mopey Hope seemed too young and dull for Liam, and so didn't really care about the pairing, but I have to question Liam giving in to Amber's advances, however reluctantly, right after the ultrasound. It might be believable for him to start feeling the family vibe when the baby becomes more real to him, but not so much now. On the other hand, some part of me likes underdog Amber besting goody two-shoes Hope. What do you think about the idea of Liam becoming drawn to Amber? Let us know by casting a vote in Soaps.com's The Bold and the Beautiful Snap Poll: Liam and Amber.

The dark side.
I'm confused about Katie running around tearfully questioning her husband's character - she knew he was ruthless when she got involved with him. Makes one wonder if she is really upset about him having dark thoughts, or about her own failure to have transformed him. As for Steffy inserting herself into this drama, as much as she and Bill may 'get' each other, it makes me a bit sad that she's always after someone else's man.

Goodbye Naggy Aggie.
Wow, so Aggie is gone from the show with no more fanfare than an off-hand remark from Nick to Katie. This show is so herky-jerky in the way they drop plots abruptly and have other things pop up out of the blue (like Justin and Donna's wedding) - so weird! 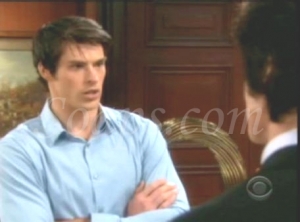 Two stories are grabbing my attention right now – the one that could develop out of the Bill and Nick dust-up, and to some extent the Liam/Amber stuff. I’m really puzzled over some of the other current stories; they are either unappealing or jump around erratically. Here are my thoughts on this past week:

Taboo boo-boo.
I’m not interested in the Taboo storyline. Thomas essentially comes across like a spoiled brat, and there is no appeal in his having a ‘thing’ for Brooke – just makes him seem weird. By the way, what happened to his all-consuming obsession for Dayzee?

Stones please.
Taylor’s character continued to disappoint as she tailed Ridge across the Atlantic harping on her theories and hoping he’d dump Brooke while her own husband sat at home. Whip needs to get some ‘stones’ and give his wife a huge wakeup call – heck, Carl the lab geek showed more backbone this week!

Rivalry renewal.
As much as I’ve enjoyed the rivalry of Stephanie and Brooke over the years, I can’t help but feel put out that Stephanie has given up on their newly-forged friendship so easily – especially with nattering Taylor as her sidekick. It made me glad Ridge chose to stay with Brooke – not only because it’s refreshing for a marriage to last longer than five minutes, but also because I wanted to see Taylor get the short end of the stick. Funny, because I used to be such an admirer of Taylor, but her recent off-the-wall behavior has been a real turn-off.

Random question.
Why are they dressing Oliver like an old man in button-downs and cardigans? Just asking.

The Bold And The Beautiful Video Promo: Bill Confronts Katie

The Bold And The Beautiful Saturday Teaser Poll: Anger Management