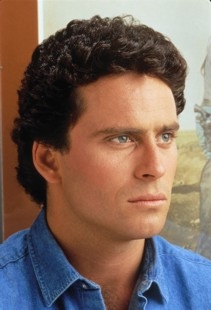 Soaps.com decided that with all the drama surrounding the character Storm Logan Jr. recently on The Bold and the Beautiful, it would be a perfect time to look in on the two actors who previously portrayed the long-suffering Logan brother!

Storm Logan Jr. is currently played brilliantly by actor William DeVry, but before he was cast in October of 2006, the role had been occupied by two different actors, Ethan Wayne and Brian Patrick Clarke.

Ethan Wayne was the original Storm, debuting in 1987. He played the part for a year and popped in for visits at various times until 2001. Of course, Ethan is one of the sons of late movie actor John Wayne. Ethan began acting as young as age seven, when he had a part in one of his dad’s westerns. He popped up in several television series over the years such as “Adam 12”, “Knight Rider” and “Suddenly Susan”, and peppered his career with interesting add-ons such as appearing numerous times on “$10,000 Pyramid” with Dick Clark, and working as a stuntman in the films “Blues Brothers” and “Night of the Living Dead”. Wayne hasn’t acted since ending his stint on B&B, and now devotes his energies to running Wayne Enterprises and serving as Director of The John Wayne Cancer Foundation.

Actor Brian Patrick Clarke did a stint as the Logan sisters' beloved and protective brother from 1990 - 1991. He played the role when the Storm character romanced Taylor Hayes (Hunter Tylo). Unfortunately, Taylor fell in love with Ridge Forrester (Ronn Moss) and their engagement ended. At that point in time, Brian left the role, as Storm took Donna (then Carrie Mitchum) with him to practice law in San Francisco. Of course Brian came to B&B as a known soap actor, having played the popular Grant Putnam/Grant Andrews character on General Hospital during the eighties. After leaving B&B, Brian did guest spots on numerous television series including, "Baywatch", "Party of Five", "CSI Miami", and "Judging Amy". Brian appeared in last year's Amanda Bynes movie "Sydney White", and currently has two projects in the works, "H2O Extreme" and "Ace Ventura 3". Interestingly, Brian is considered one of the top celebrity runners in southern California and is married to an Olympic gymnast, Kathy Johnson!

Taking a ride with these two past B&B actors has been great! Soaps.com wishes both men good luck in their future endeavors!