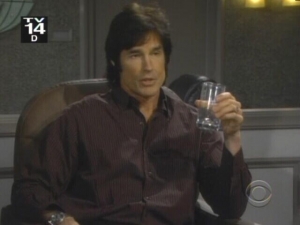 This week, The Bold and the Beautiful shifted back to players other than Ridge and Brooke. At first, I was excited for some other action, but this week ending up leaving me ill. Here’s what turned me off:

Toss Taboo.
So everyone was after Brooke again this week. I think Brooke should tell everyone to go screw themselves. She had no idea what Thomas was going to do at the press conference and was put on the spot. As for that silly kiss, well, Brooke has done a lot worse. It is who she is and Ridge is never going to leave her. It almost seems like everyone has freaked out more over this kiss than they did for Brooke’s accidental tryst with Oliver. However, I don’t think it is Brooke’s responsibility to “save” Ridge’s relationship with Thomas. She should back off and let his real mother handle him. That might be hard to do, though, considering the doc hopped a plane to go with Ridge to Paris. Taylor asked Ridge again what it would take for him to leave Brooke. Obviously nothing! Taylor is supposed to be smart, so why is she making herself look desperate by asking Ridge such questions? Speaking of Ridge, why does he think he is the greatest gift ever to women? I’d be after cutie pies Bill or Liam, myself. Ridge sat so smug as Taylor admitted that Whip was behind the Taboo photo scandal and boasted she could do better. With who, him? I said last week that Brooke loved being the object of every guy’s fantasy. I think Ridge enjoys knowing that if he wanted to take Taylor back, she would drop whatever man she was with in a second for him. This triangle has been played out so many times. Please let Taylor have a happy love life that doesn’t involve her still pining for Ridge on some level.

Stand by your man.
A much more intriguing triangle is Bill, Katie and Steffy. Steffy knows how to push both Bill and Katie’s buttons. Even though I don’t always agree with her actions, I love watching what Steffy will do next. I must admit, I just don’t see the chemistry between Bill and Katie. I think their relationship is very forced. Bill and Steffy are much more exciting to watch. Aside from that, I was surprised Bill revealed his plan to kill Amber to his wife and didn’t concoct some excuse to cover it up. I wonder if Katie was more upset about the murder plot or him hanging out with Steffy. I would prefer it if Steffy would find a man of her own without having to wreck a relationship. Vote in the Bold and the Beautiful Snap Poll: Steffy Needs a Man and tell us who you think she should be with.

Train wreck.
Honestly, Amber makes me want to throw up. Bill summed up this entire storyline so perfectly-it is vile and makes me uncomfortable to watch. Watching Amber gloat about her fabulous beach house and picking out baby names with Liam was disgusting. Poor Liam and Hope are obviously still very much in love with one another. Even though Oliver is trying to take advantage of the situation to get Hope back, I actually feel bad for him because the day is going to come when he learns he's tied to Amber forever with a baby.

Wouldn't it be nice?
I'd love to see Eric and Stephanie have something to do other than argue about Brooke. It would be nice to see what is happening at Jackie M. I miss Nick and Jackie! I'm sure Whip would have something to say about his wife going to Paris with Ridge, too. Hopefully, next week will bring about some new storylines, or at least head in that direction. The only thing from the eighties that needs to be on this show is a pair of leggings and frosted lip gloss-not recycled storylines.

We invite you to join Soaps.com on Twitter @soapoperafan, "like" Soaps.com on Facebook to dish on The Bold and the Beautiful, all the other soap operas, Glee, Grey’s Anatomy and Vampire Diaries!