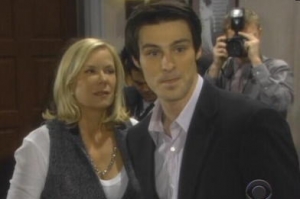 Get your own lives. (Soaps.com)

It was a short week on The Bold and the Beautiful, but I found myself really annoyed with everyone on the show. It seems like it’s the same thing over and over with all of them. They all seem to have selective memory. Here’s my take on what is right and wrong.

Ridge, the man with Botox of the soul.
The line of the week for me was when Ridge told Brooke, “No matter what you do, I just can’t stay mad at you.” That pretty much sums it all up. She can accidentally sleep with her daughter’s boyfriend, and it’s all fine and dandy to Ridge. So she kissed his son, no big deal. Why would Brooke try to walk the straight and narrow when her own husband doesn’t really mind? He seems to have no feelings about anything. I think deep down Ridge gets excited wondering what his wife will do next.

Brooke, the woman who never learns.
I actually felt bad for her this week when Stephanie and Taylor were ripping into her. She seemed genuinely upset that Stephanie was disappointed in her and kudos to Katherine Kelly Lang’s acting in this scene. Yet why did she feel she needed to comfort Thomas? Isn’t she just setting herself up for more trouble? She never learns. I think Taylor was onto something when she told Ridge that Brooke was becoming vulnerable to Thomas. Brooke just can’t help but try and be the center of every man’s fantasy.

Taylor, the psychiatrist who needs her own head checked.
I can totally understand Taylor’s need to protect her son, especially from a woman who has caused her so much grief over the years. However, I think she’s going about it in the wrong way. She’s treating Thomas like he’s ten, rather than a man. It wasn’t so long ago that Taylor not only dated, but was engaged to Brooke’s son, Rick. The doc is getting a taste of her own medicine and it’s not fun. For Taylor, I just wish she would find her own life outside of Forrester.

Thomas, the ungrateful golden boy.
How funny was it when Thomas told Ridge that everyone else in their family, including his Grandpa Eric, Uncle Thorne and his father have been with Brooke and he wanted to see what all the fuss was about? He has a point. However, I don't think Thomas is still into Brooke. I think he's into the power. He needs to be careful about messing with his dad, though. It wasn't too long ago that Thomas almost went to jail for attempted murder when trying to knock off Rick when he was dating Steffy. Ridge helped bail him out of that mess. Thomas should also be thankful he has been given so much simply because Ridge is his dad. It's not so easy for the rest of the common folk.

Stephanie, the matriarch who needs to relax.
This isn't the first time that Stephanie and Brooke have broken a truce. I think in this instance, Stephanie is overreacting when she says that Brooke betrayed her. She should be mad that Brooke has gotten herself into hot water for doing something inappropriate yet again, but reverting back to their old ways seems counterproductive. Maybe instead of ripping into Brooke, Stephanie could escort Brooke to a therapist? Brooke might benefit from some psychoanalysis-just not from Taylor.

I'd like to see all of these characters break out of their normal patterns and maybe show one another some understanding and sympathy. It might move some of them forward, as opposed to going round and round in the same boring circle. Which character do you think needs to get out of their rut the most? Stop by and vote in the The Bold And The Beautiful Snap Poll: Shape Up Or Ship Out

We invite you to join Soaps.com on Twitter @soapoperafan, "like" Soaps.com on Facebook to dish on The Bold and the Beautiful, all the other soap operas, Glee, Grey’s Anatomy and Vampire Diaries!