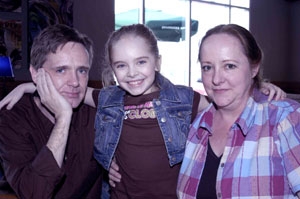 Darcy with Amy Carlson on the set of "The Kidnapping"

You may not see a lot of Abby Carlton on The Young and the Restless or The Bold and the Beautiful, but that certainly doesn’t mean her portrayer Darcy Rose Byrnes hasn’t been working. Having appeared in several primetime TV shows, movies of the week and theatre productions, Darcy is one busy working actress.

I met Darcy and her parents CJ and Cathy at a local Burbank Starbucks, where after being warmly greeted with a lovely potted rose plant, we hung out drinking iced teas for over an hour. During this time, I quickly learned that behind this sweet, little nine-year-old exterior, lies a high energy, multi-talented dynamo.

Referring to herself as, “the CBS ping pong ball,” Darcy finds her character going back and forth from Los Angeles to Genoa City to deliver key plot points, like Ashley’s engagement to Ridge Forrester. But switching shows isn’t as big a deal as it is made out to be, as the shows are taped in the same studio and use a lot of the same cast and crew.

However, when she first crossed the hall to The Bold and the Beautiful, the cast told her it was in deed different on their side. According to Darcy, “The first time I worked over there, they said, ‘We’re nicer over here.'” I asked if that was true, but Darcy is far too diplomatic to answer that question. All I got out of her was, “They’re all so nice. It’s almost like they’re my family because I see them so much.”

Apparently the only differences in shows is that she gets off work much earlier on The Bold and the Beautiful and she’s the oldest child actor on that set, instead of being the youngest, as is the case over at The Young and the Restless.

Working roughly twice a week on B&B, maybe four times if there's a wedding taking place, she has plenty of time to pursue other projects. Recently co-starring in "The Kidnapping" for the Lifetime Movie Network, she plays the victim of said crime. Originally titled "Black Friday," the movie also stars Amy Carlson (ex-Josie, AW) and Judd Nelson, who Darcy referred to as, "a big ole laugh machine."

Darcy also has another project coming out on the Hallmark Channel called "Shark Swarm." Premiering over Memorial Day weekend, this mini-series also stars Daryl Hannah, who after seeing her in the movie "Splash," Darcy was thrilled to meet. Although she didn't get to spend much time with her, Darcy, "freaked out," when she learned Daryl would be in the movie and reported that, "She is so nice, so funny." As a side note, "Shark Swarm" also stars John Enos who played Bobby on The Young and the Restless.

Aside from these projects, Darcy has also been featured in the primetime series, "Brothers and Sisters" "Cold Case," and "Without a Trace." She has taken to the stage in productions of "Sound of Music," "Cinderella," "Annie Jr.," "Into the Woods" and "Music Man Jr." and has also appeared in the films "The Sparky Chronicles" and "Perfect," which also starred her father.

Labeled a "triple-threat" by her friends, it's clear Darcy enjoys many aspects of the entertainment business. Also a singer, dancer, song writer, pianist and guitar player, Darcy's favorite projects involve a combination of the above, especially musicals. As she also takes improv classes, CJ let me know that Darcy is adept at quick changes and the occasional ad-lib when B&B and/or Y&R actors change things up in order to take the scene where it needs to go.

Not only is Darcy a performer (she recently recorded a song called "Hope is More" that she plans on putting out by Christmas), but she is also already concerned with serious issues. As her grandmother died from breast cancer, Darcy has taken it upon herself to educate people on this disease. She puts out a weekly newsletter, which she hands out to her friends and classmates on various topics and will focus on breast cancer for her next issue. This young activist even approached Deborah Blackwell (GM of SoapNet) when she was just six years old to offer her services if the channel had any plans to promote awareness of the disease.

One would think that with all of her extracurricular actives and work responsibilities the young actress wouldn't have time for school, but now that she is home schooled (she attends a virtual public school which allows her to test with other kids and complete her studies with set teachers), she can juggle all her commitments much easier, as well as have time to see her friends.

A winner of three Young Artist Awards for her work on The Young and the Restless, Darcy wanted to be an actor at an early age. Her mother recalled, "When she was two or three she would watch commercials and say, 'I can do it better.'" Having their daughter enjoy what she's doing, is important to Darcy's parents, as well as monitoring the roles she takes. Even though they've turned down parts due to violence or language, the Byrnes encourage Darcy to audition as much as she can, as one audition often leads to other work. Case in point, she went out for one role, which she didn't get, but was offered "Shark Swarm" and "The Kidnapping" instead.

While we know her best as quiet, mild mannered Abby Carlton, it's clear that Darcy Rose Byrnes is so much more. I'd like to thank Darcy and her parents for meeting with me and can't wait to see where this dynamic actress' career takes her.

Tracy Melchior Back as Kristen...