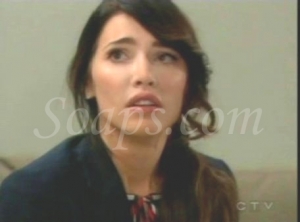 There were really only two storylines featured this week, and admittedly, I’m not a big fan of either one. Let’s take a look:

Bill’s blunder.
The bit with Amber going over the lookout had me on pins and needles for a few minutes, as did Steffy struggling to pull Amber back to safety. However, the whole idea that a supposedly intelligent man like Bill would plot Amber’s murder as the only means of dealing with the situation is just bizarre. Not only that, but he spends all of his time as he’s planning this, going around telling anyone who will listen that he’s going to ‘handle the situation’. Dumb. It was rather entertaining listening to him go on about Amber’s death being a tragic accident to Steffy, who knew Amber was alive and well. I guess Steffy will use this information to manipulate Bill now. Haven’t we seen her do this before?

Unleashing tension.
It seems Katie has done nothing much but ‘support’ Bill for nearly a year now. I’d like to see this character get a storyline of her own. While we’re at it, can we also have Eric, Thorne, Felicia, Bridget, and the Marone family back in the action?

Taylor's tirades.
At this point, it doesn't matter if she's yammering on about Steffy, or Thomas and Brooke, I've had enough of Taylor's over-the-top ranting to last a lifetime. She has to be the most out-of-control psychiatrist ever! What's worse, is that I feel like we've heard all of this dialogue before - repeatedly. To make it worse, most viewers were hoping not to revisit this non-storyline. Thomas kissed Brooke while she was asleep, so it doesn't even make enough sense for Taylor, or anyone else to blame her. Should she have told Ridge? Yes. Now let's move on. What do you think about Taylor expressing her concerns about Brooke? Let us know by casting a vote in Soaps.com's The Bold And The Beautiful Snap Poll: Taylor's Rants.