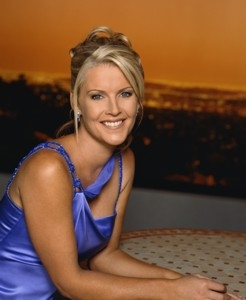 Soaps.com has discovered that former B&B actress Maeve Quinlan (Megan Conley) has been one busy lady since she left the show in 2006! She has won roles on television and film, and in her most recent series, she is not only the star, but also the creator, executive producer and writer!

Even before she left The Bold and the Beautiful, in 2005, Maeve landed a starring role in a television series called “South of Nowhere” that airs on The N Channel. The series is still running with new episodes due to air beginning in April of this year. Maeve also played a character named Kitty Ryder on the Courtney Cox hit “Dirt” for two episodes in 2007 and 2008. More recently, she has completed filming on a new movie, “Not Easily Broken”, a drama about a married couple who find themselves pulled in opposite directions after a car wreck changes their perspective. One of Maeve’s co-stars in the film is Eddie Cibrian who also acted in daytime, as Matt Clarke on The Young and the Restless and Cole on the now defunct Sunset Beach.

Maeve’s newest role, however, is one that she created for herself! She is the co-creator, executive producer, writer and star of a new episodic venture called “3 Way,” an online series that tells the story of a straight girl (played by Maeve) who winds up single and invites a lesbian friend to become her roommate. The friend, in turn, brings her girlfriend into the mix and comedy ensues! To check it out for yourself, visit 3 Way TV! Through her company Beech Park Entertainment, Maeve had previously created and executive produced “The Pack” for Animal Planet!

As if this isn’t enough for any one human being, Maeve has also just completed writing a series of children’s books with writing partner Lori Bregman! The first in the series, “Buford’s Bath” is expected to hit bookstore shelves in mid-2008!

Megan Conley, Maeve’s B&B character, was the receptionist at Forrester Creations, who also served as Brooke Logan’s (Katherine Kelly Lang) confidante. Maeve was hired to do one day’s work for The Bold and the Beautiful and the character ended up staying around for 11 years! The beautiful and talented Irish actress certainly made an impression on daytime fans, as they still pine for her return!

Soaps.com wishes to congratulate Maeve for her initiative and creativity in conceptualizing and seeing to fruition her new series, “3 Way”! We hope it gets even bigger for her in the future! We just hope that if B&B ever comes calling for Megan she isn’t too busy to accept!