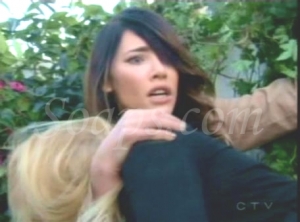 A lot happened on the show this week! Marcus came back, Steffy’s presence was definitely known, and Amber finally went over that lookout. Here are my comments:

Strong and spoiled.
Steffy’s behavior was really uncalled for earlier in the week. After dissing her own grandmother, she slammed Dayzee, and made it known that she intends to break up a marriage. Seems like a girl who missed out on discipline growing up! But later in the week, when she saved Amber and called Bill out on his own turf, I realized that to have an outspoken character like Steffy, maybe you have to take the bad with the good. I love that she’ll stand up to Bill – probably even blackmail him – and how she found it in her to save Amber’s life. I’m not sure what the writer’s are intending with the ‘bad’ side of Steffy, but when it all comes out in the wash, she’s certainly complex and interesting to watch on screen. Kudos!

Hypocrite Cafe.
I’m not sure what’s going on with Marcus and Dayzee, but they both seem to be saying one thing and doing another. Marcus makes a spectacle about being her boyfriend, and then goes and makes a play for Amber. Dayzee reassures Marcus, and tells Thomas she’s not into dating him, but then agrees to go to a charity ball with him on the gas-guzzling private jet! So, I’m still waiting on the chemistry to build between Dayzee and Thomas, and I can’t exactly root for Dayzee and Marcus either. Yeeps, I couldn’t even get into the conflict between Thomas and Marcus because Thomas comes across like such a choir boy. Frustrating!

Kissy-face.
Brooke and Ridge are becoming a parody of themselves. The constant kissing and repeating of the same lines over and over is mind-boggling. Even if one of their kids has a crisis, they spend five minutes on it before looping back to discussing how great they are together! It's getting funny. What do you think about this topic? Let us know by voting in Soaps.com's The Bold And The Beautiful Snap Poll: Kissy-Face.

Splitsville.
Was anyone else yawning as Liam and Hope decided to go their separate ways? I just didn't care.

Bill the bully.
Well, it looks like Bill the bully might have the tables turned on him soonish. After several attempts to find an opportunity to do Amber in, nature intervened on his behalf. But Bill is bound to feel egg on his face when he learns Amber survived, and he's left dealing with Steffy. I think she will find a way to use this to blackmail him into dumping Katie. I like that Bill 'came around' to being a loving father to Liam, but he took it way too far, and seeing him get a taste of his own medicine might be fun.