Hospital scenes.
Both Bill and Amber were very believable and moving in their hospital scenes earlier in the week - realistic tension and emotions - great to watch!

Bedside vigil.
I sighed and shifted around in my chair throughout Hope's speeches to Liam this week - dullsville. As for Oliver's visit - what was that about?

Bill's plot.
Toward the end of the week I was finding Bill's intensity way over-the-top, and his plan to push Amber over the cliff just so silly. What do you think of Bill plotting to kill Amber? Let us know by casting a vote in Soaps.com's The Bold And The Beautiful Snap Poll: Bill's Plot.

Priceless.
I got a kick out of Nick walking in on Jackie and Owen in the office. Some will say Jackie should 'act her age', but I thought this particular scene was cute - the expressions on Nick's face were priceless! As for Nick giving Oliver advice about Hope - why does he care? 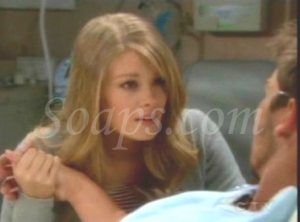 There were some really great scenes in the hospital early in the week, but things went a bit downhill after that. Thursday’s episode in particular felt like a very long half-hour. Things picked up on Friday. Let’s take a look at the week:

Is the devil making her do it?
I love that Steffy’s back in the mix stirring things up. The one complaint I have, however, is that I don’t understand her motivation in being so mean. She was downright disrespectful and condescending to Stephanie at the cafe (such a turn off!), and I also don’t get her renewed venom toward Brooke, since she had cooled considerably on that when she left for Paris. To appreciate this character, I need to understand her better, otherwise she’ll just be a one-note villainess.

Bedroom talk.
Um, why is it that every conversation Ridge and Brooke have ends up being about them, their relationship, and destiny? Yeesh!

Thomas and Dayzee.
I still feel like an outsider on this one, meaning I’m not being drawn into the emotions they are supposedly feeling toward one another. I’m hoping that will change as things develop. I’m also praying that they de-geek Thomas a bit. When did he become the type to wear his collar buttoned up to his neck? It’s really not helping him lose that creepy vibe he’s still giving off.

The Bold And The Beautiful Video Promo: Brooke And Steffy Square Off

The Bold And The Beautiful Saturday Teaser Poll: Who Ruins Plans?