Hospital drama.
Things got a whole lot more dramatic and interesting in the hospital after the explosion. Bill expressing himself to Liam was particularly moving. Of course, I didn't like him and Katie being so mean to Amber, but she put herself in the cross-hairs, and will have to deal with the fallout.

Called out.
I was impressed with Dayzee calling Thomas out on kissing her, but she didn't really follow through with it, and turned around and accepted a date with him. This is strange in and of itself, since she made it clear to Marcus that she wanted to be exclusive. Anyway, considering Thomas barely knows her, and knows she's dating Marcus, kissing her and asking her out seems a tad arrogant. Some thought Thomas getting googly-eyed over Dayzee was cute. For me, coming so soon after him mooning over his step-mother, it's still leaning more toward creepy. As for the idea of Thomas and Dayzee becoming a couple - jury's still out. I don't feel loads of chemistry between them, but they could grow on me.

She's back!
I'm kind of excited about the return of Steffy because she has that unpredictable, devilish quality to her that makes you sit up and take notice when she's in a scene. Who do you think she has her eye on? Tell us by voting in Soaps.com's The Bold And The Beautiful Snap Poll: Steffy's Man. 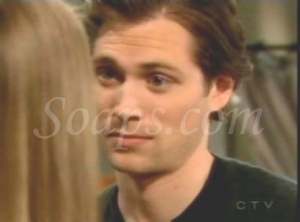 Well, since the whole week revolved around Amber’s pregnancy, with a smattering of Thomas and Dayzee thrown in, I guess that’s what we’ll discuss! Here we go…

The results are in.
It was no surprise what the results would be, but why did Amber spend a day and a half moping about everyone despising her – did she think they were going to embrace her into the fold? It’s been very frustrating to watch Amber in this storyline as she has been stuck in the wrong age group and has regressed to behavior that she had totally outgrown. Nothing about Amber pulling this scam makes any sense. She came to L.A. to build a career to help make a good life for Deacon’s son, Eric, who hasn’t even been mentioned. Not only that, but she would never let Tawny talk her into doing this – it was Tawny who had Little Eric and wasn’t taking care of him properly! To top it all off, this storyline has been done over and over on soaps, so it fails to intrigue. The only part to get my attention to any degree has been Bill’s reaction – and that’s mainly because he is yelling and over-the-top.

No hope.
Oliver made the best point of the week when talking to Hope about the paternity results. He said a guy can’t ‘perform’ while unconscious, so Liam must be lying to Hope about what really happened with Amber. Why is Oliver the only one thinking this way – none of them know that the DNA test was fixed, so why aren’t they questioning Liam’s version of events?

A property in Malibu.
I got a chuckle out of seeing ex-naughty cigar smoker, Nick, out pimping Malibu real estate in what seemed to be a fine mood. I guess the withdrawal symptoms and irritability have magically disappeared since last week!

The Bold And The Beautiful Video Promo: Oliver Asks Hope For Another Chance

The Bold And The Beautiful Saturday Teaser Poll: Shared Kiss