The great paternity question.
This storyline continues to be predictable, but the silver lining has been the laugh-out-loud elements, such as Bill passing around hand sanitizer in Tawny's trailer, the cats/fake meowing, Tawny and Carl on the tour bus, and the antics in the lab. Carl cracks me up - great idea to bring him back! Bill's doctor, Ramone, has been an added bonus as well - love his look - vaguely reminiscent of the Kentucky Fried Chicken man, only way hotter!

'The One'.
How 'dumbed down' is the writing when the very same day that Stephanie tells Thomas he'll know 'The One' as soon as he sees her, he goes to the cafe and falls for Dayzee on sight? Like we're not going to get it unless they're that obvious about it! In any case, Thomas stated he wants what Ridge has with Brooke, and judging by the goofy, enraptured look in his eyes, it seems that newcomer Dayzee, has unwittingly become Thomas's 'destiny'. Don't even get me started on him laying a kiss on her without even asking - pretty confident! What's your opinion on Thomas and Dayzee? Let us know by voting in Soaps.com's The Bold And The Beautiful Snap Poll: Is Dayzee 'The One'? 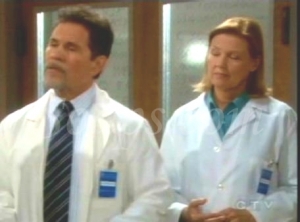 Credit: Carl cracks me up. (Soaps.com)

It was a fair week on The Bold and the Beautiful. There was some good, classic soap opera storytelling happening, and some comic relief, but nothing stellar to report. Here are my thoughts:

Intervention.
Although the stories from the lung cancer survivors were extremely moving, I’m officially over this storyline, which has acquired the feel of a long lecture. It’s a responsible message to send, but the delivery hasn’t been that entertaining except for the initial one-liners between Stephanie and Nick. As for Owen and Jackie’s ‘serious’ discussion about Nick’s addiction, I was too distracted by them macking on each other to take in what they were saying – was that really necessary?

Brooke and Bill.
I liked the switch-up of having Brooke and Bill share a few scenes together. I just wish they had been discussing something far more interesting than Liam and Hope.

The Bold And The Beautiful Video Promo: Amber's Paternity Results Are In

The Bold And The Beautiful Saturday Teaser Poll: Attempted Murder?