Kimberlin Brown and the Antelope Droppings 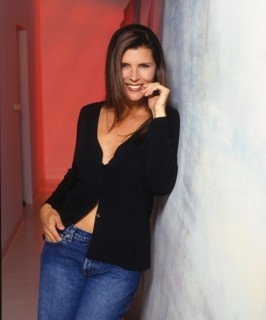 Yes, Soaps.com readers, the title is correct! Not only did Kimberlin Brown (ex-Sheila Carter) deal with antelope droppings on a recent trip to South Africa, she spit them in a contest!

Kimberlin visited Mpumalanga last week to attend the Women’s World Cup of Golf in Sun City. A friend of renowned jewelry designer, Jenna Clifford, Brown joined her and golf champion Tanya Fourie for a meal in White River. Over sushi, Kimberlin met the MEC for economic development and planning for the region, who expects that positive things will come out of having a celebrity such as Brown share her experiences in the province back at home in California. Kimberlin stayed in Mpumalanga from Tuesday, January 22nd through Friday, January 25th when she moved on to Thornybush Game Reserve in Limpopo on Saturday.

Thornybush is where Kimberlin had her aforementioned run-in with the antelope droppings. The Times newspaper for the region, reported on Sunday that Kimberlin beat other guests at the game reserve in a bokdrolspoeg contest. The challenge involved is to spit dried antelope droppings as far as possible! Having had a great time, Kimberlin has told her South African hosts that she will return in August with her husband and her children!

Although, Kimberlin has been busy with her children, golfing and other personal pursuits since last leaving The Bold and the Beautiful as villainess Sheila, she has given interviews recently which indicate an interest on the part of the CBS daytime in possibly resurrecting Brown’s version of the bad girl, who was last seen on The Young and the Restless played by Michelle Stafford in a dual-role event. However, Stafford’s Sheila died.

Soaps.com is happy to pass along news of Kimberlin’s adventures and we look forward to seeing her return to CBS as Sheila anytime in the future, although we’re not sure the shows’ characters would agree with us!