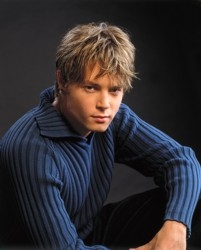 With the current Rick Forrester (Kyle Lowder) recently popping back up on the screens of B&B fans, it makes us get to thinking about the actor who formerly portrayed the character. Justin Torkildsen played Rick from 2000-2004 through the tumultuous years of Rick’s marriage to Amber Moore (Adrienne Frantz) among other things!

Soaps.com has discovered that the avid outdoor sports enthusiast, who married his soul mate Bonnie Binion in December of 2001, has been keeping very busy in the industry!

Of course, Justin started out modeling for Nautica, but the actor has really diversified in the field since then. He performs stand-up comedy, writes scripts and in his latest film ventures is listed as co-producer and production associate as well as holding down a role!

Since Justin left The Bold and the Beautiful he has been involved almost non-stop in film work. “Skeletons in the Desert”, a horror flick which came out in December of 2007 on USA Network, had Justin in the role of Ryan, one of six friends who head out on an ill-fated trip to Las Vegas. “Knife To a Gunfight” is currently in production, with Torkildsen in a lead role, as well as being billed as the co-producer. He will also be appearing in the upcoming film “Jack Rio” with fellow B&B ex-cast member, Sean Kanan (ex-Deacon Sharpe). The film is a thriller in which Justin plays a smaller role while also acting as a production associate. It is due out in June of 2008.

Soaps.com wishes Justin all the best in what appears to be a very bright future in the acting industry!

Kimberlin Brown and the Antelope...