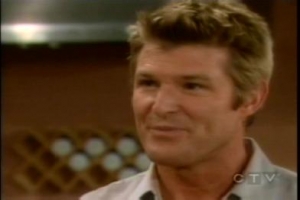 Want to see a lot more hot photos of Winsor Harmon (Thorne Forrester)? How about the scoop on where he’ll be appearing? Well, of course, you look to Soaps.com, but the great, breaking news for fans of The Bold and the Beautiful’s Thorne, is that Winsor Harmon has struck a deal, effective immediately, with a company to bolster his online presence!

As those familiar with Winsor’s celebrity know, he is an avid participant in fan events and meet & greet opportunities with fans worldwide. Recently, Winsor joined our own Editor-in-Chief, Christine Fix, on a soap-themed cruise aimed at fans interacting with their favorite actors and actresses from daytime television! In the latter part of 2007, he also was a great competitor in a volleyball tournament benefiting charity!

Winsor’s character, Thorne, is currently experiencing a lull in his story line, after his cataclysmic relationship with Donna Logan, who is now engaged to his father. Spinning out of control while unable to come to terms with the loss of his wife Darla, Thorne was headed to a dark place until his brief entanglement with Donna gave him the strength to move on. Of course, it didn’t turn out well at all, but Thorne happily, didn’t turn back to his addictions, but instead turned his attention to Donna’s less flamboyant sister, Katie. Their relationship is presently on hold, as Katie was deeply disappointed in his participation in a plot against her sister. Fans of Thorne (and Winsor) were thrilled for him to have had such great material to act, and are eagerly awaiting his return to the front burner!

Soaps.com is very pleased to hear of the upcoming and increased presence of Winsor Harmon online! We can’t wait to see the new website! B&B fans, watch this spot for up-to-the minute news on Winsor, and for an announcement when the new site is up and running!