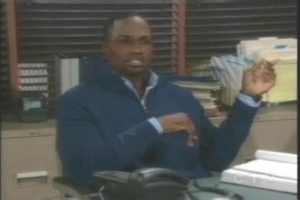 Hurray! The Bold and the Beautiful will be represented at this year’s NAACP Image Awards thanks to the wonderful acting of newcomer Mykel Shannon Jenkins (Detective Charlie Baker)! Although the handsome detective hasn’t had a huge amount of airtime, his portrayer, Mykel, has proven in a short time that he is a natural!

The NAACP Image Awards were created to honor projects and individuals that promote diversity in the arts in television, recording, literature and motion pictures. This year’s theme is “Stand Up and Be Counted.” Mykel Shannon Jenkins is nominated in the “Outstanding Actor in a Daytime Drama Series” category.

Although Mykel hasn’t had a lot of material as of yet on The Bold and the Beautiful, his acting skills and natural ability certainly shine through as he portrays a detective with just the right amount of cynicism and swagger. Of course, as the winner of Season One of “I Wanna Be A Soap Star”, he has a proven track record of rising to the top! Mykel will have his four year old son and wife Tracy cheering him on as he enjoys his first acting nomination!

Soaps.com would like to be among the first to offer heartfelt congratulations to Mykel on his nomination, and to wish him luck on the big night! Of course we know, that for B&B fans, Mykel is already a winner!

The NAACP Image Awards will air on February 14th on FOX Network. For more information on the awards, the other categories and nominees, please fee free to check out Soaps.com Main Page News!