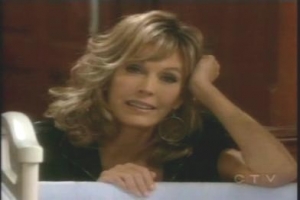 Soaps.com readers who count themselves among the fans of Lesley-Anne Down (Jackie Marone) might consider paying a visit to her Official Fan Club website soon. We can tell you that they are running a contest, and that Lesley-Anne posted a personal message on the site recently!

Jackie’s story line has picked up on The Bold and the Beautiful lately, what with her and Clarke taking over Spectra and giving press conferences in bathtubs! The newly blond grandmother is also gearing up to meddle in son Nick’s affairs as she discovers the truth about baby Jack’s biological mother!

Of course Jackie’s hectic schedule hasn’t been the only thing Lesley-Anne has had to contend with. As if the holidays aren’t busy enough, Lesley-Anne managed to fit in a trip to England to appear in “Upstairs, Downstairs” for BAFTA, and even snuck in a little couple time with husband Don, who was on his way back from Romania! On the down side, Lesley-Anne and her family also had a close call when the California wildfires came thisclose to their home.

If reading a personal letter from Lesley-Anne isn’t enough – you can also register on the site and enter a contest to win a beautiful signed photograph of the actress! To qualify, all you have to do is tell in your own words why you admire Lesley-Anne. The contest closes on February 28th, 2008.

The Fan Club is also looking for B&B fans to write in to Bradley Bell and tell him whether or not they are enjoying Jackie’s current story line. Yes, Soaps.com readers, they’ll keep you as busy as the actress herself over at Lesley-Anne’s Official Fan Club!