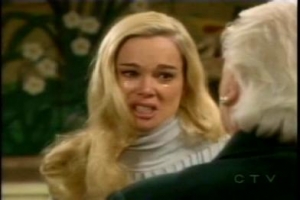 Well, Soaps.com readers and B&B fans, the current story line involving the Logan family and Stephanie’s shooting has been incredible! Not only because it was a good whodunit with lots of twists, but because it ended up doing what I thought was virtually impossible – it gave rooting value to the pairing of Eric and Donna!

In this week’s poll on The Bold and the Beautiful main page, I asked, “Who do you want Eric to end up with?” The two choices were Donna (they’re truly in love), or Stephanie (history means more). To my surprise, out of 162 votes, 68% were in favor of Donna, while Stephanie came in with only 32%! Previous to the twist in the storyline where Donna must leave Eric in order to ‘save’ her brother and father from prison, the sentiment expressed by fans was largely against the Eric and Donna pairing. The most often-cited reasons being the age difference, that she was only using him, as well as the fact that Eric had been with both her mother and sister in the past. But something has changed.

Stephanie has yet to get her comeuppance for her sinister manipulations that led to Brooke being attacked by Andy. The shooting wasn’t enough punishment – she was only down and out for about a week, and doesn’t really have appeared to have learned her lesson! This is leading to a majority of viewers not wanting to see La Forrester come out on top yet again. Additionally, there have been many vocal fans on the B&B message boards asking why Stephanie would want Eric back at all! After his many dalliances with younger women, his recent words about how he feels when he is with his wife, and signing a contract that keeps her out of Forrester Creations, it is unbelievable that a strong woman like Stephanie would even give him the time of day at this point!

But there is one other factor swaying fans to accept the pairing of Eric and Donna, and that is the portrayal of their relationship as real love. Thanks to the powerhouse acting of Jennifer Gaeris, she has viewers feeling her pain as she tries to come to terms with the fact that she must part with a man she has deep love for, in order to do right by her family. Donna isn’t using Eric the way she was Thorne, and B&B viewers know it! Some still don’t care for the character of Donna Logan, but even they admit to empathizing with her predicament!

It will be very interesting to see how the story plays out. Will Donna break-up with Eric? Does she have something else up her sleeve? Will Stephanie get him back or will she decide she can’t live with a man who loves another woman? Stay tuned to The Bold and the Beautiful and Soaps.com for the answers to those questions and more!