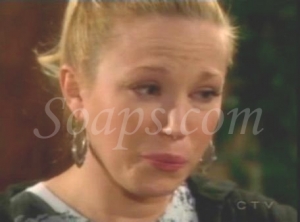 Well, it’s been a bit of a step down this week from Stephanie’s uplifting Christmas at Dayzee’s. Seems we’re back to being mired in the Thomas/Brooke photo scandal, and Amber’s knocked-up! I could have done with some New Year’s Eve celebrations instead. Here are my thoughts on this past week:

Shut it!
Something that drove me nuts was Hope interrupting and talking over Liam every time he opened his mouth to say something at their picnic. I was actually ready to shout at the TV screen, “Shut up and let him talk!” What a motor mouth. She irritated me so much I had a hard time feeling bad for her when he confessed to the infidelity he didn’t commit. Oh, and by the way, what person in this day and age would ask, “Did you go all the way?” Just because Hope’s a virgin, doesn’t mean she would talk like she’s in the 1950’s. Her anger at Liam’s confession, however, was right on point!

Shut it! Part II.
When Taylor joined Thomas and Brooke outside at Forrester and laid into them yet again about the photo, I so badly wanted Brooke to just stand up and say, “Hello hypocrite! Do you not remember bedding my son Rick? Just asking!” Why has no one raised this point throughout all of Taylor’s ranting and raving? Drives me crazy!

Knocked up!
The whole concept of Amber, who matured over on sister soap, The Young and the Restless, and who was married to Rick Forrester eons ago, reverting to being depicted as a gold-digging, trashy, thirty-something who hangs out with teens, is lost on me. Now she’s pregnant, and the father (Oliver) is basically a teen, and Tawny is going to persuade her into attempting this hare-brained scheme that is way beneath the Amber we have come to know. I miss the Amber who was a kind and sensitive friend, and who left Genoa City to do right by Little Eric when Deacon messed up. The positive is that Tawny came back – such a great, campy character!

Whipped.
I loved the points Aggie was making to Whip this week. Is he stupid? If Taylor's already calling out Ridge's name in bed, it's not much of a stretch to see her running back to him if he dumps Brooke! I'm not sure Whip can see the forest for the trees, if you catch my drift. In any case, it's kind of fun to see ol' Ridge putting two and two together and getting all up in Whip's face. It's a shame, though, that Whip will come out of this looking like a total weenie, especially now that he's lied to his wife's face.

No New Year's?
I was disappointed there were no New Year's Eve parties or family celebrations this week on B&B. It's these times of the year that I look forward to characters stepping outside of their circumstances to mingle, and sometimes cross the paths of characters they don't usually appear in storylines with, so it was a bit of a bummer that New Year's Eve passed unmarked.

What did you think about this week's storylines? Let us know by casting a vote in Soaps.com's The Bold And The Beautiful Snap Poll: Best Storyline Developments.