2010 The Bold And The Beautiful Year In Review 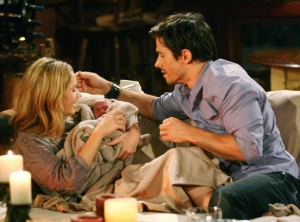 Few could argue that it’s been a huge year for The Bold and the Beautiful. Winning a second straight Daytime Emmy Award for Outstanding Drama Series, Bradley Bell and company have delivered yet another year of soapy, steamy, drama-filled goodness. Granted, no show could ever produce a year that’s entirely solid, but “B&B” came pretty close. Let’s take a look back at all the drama that unfolded during “The Bold and the Beautiful’s” successful 2010 campaign.

Control of Forrester Creations switched hands back to its rightful owners. Thanks to Steffy’s blackmail and trickery, Bill Spencer signed the rights of the company over to Ridge, Eric, Stephanie and Taylor. Of course, this didn’t sit well with Brooke, but it’s an arrangement that has stayed solid for the rest of the year. Meanwhile, Brooke’s daughter with Deacon, Hope, became all grown-up and started to work at Forrester.

In other news, Aggie lost the baby she was carrying for Bridget and Nick. A devastated Bridget ran into the arms of Owen and the two ended up sleeping together. Of course, Aggie’s brother Oliver accidentally caught the dirty deed on camera. Aggie caught wind of it, too, and tried to spill the beans to Nick, with whom she’s madly in love. To make things worse, Bridget became pregnant because of the one-night stand with Owen.

Somewhere amongst all this mess, Whip proposed to Taylor and the two got married. Yawn.

Back at Forrester, Eric and Stephanie kissed one another. Despite being married to Donna, Eric decided to have Stephanie move into his and Donna’s guest house. Meanwhile, Donna’s parents, Stephen and Beth, came to visit because Beth’s health was deteriorating. Low and behold, Stephanie and Beth got into a fight by the pool and the end result was Beth falling into the water and drowning! Donna was devastated but Eric stood by Stephanie, knowing that she wasn’t directly responsible for killing Beth. Cue the divorce between Eric and Donna. Eric quickly rekindled his relationship with Stephanie.

Also at Forrester, Steffy was making Hope’s professional life a living hell, and was also trying to sleep with Hope’s new boyfriend, Oliver. Hope and Oliver loved each other, though, and there was no coming between them. That is, of course, until Oliver accidentally slept with Brooke during Hope’s masquerade-themed party. The debacle eventually came to light, killing Oliver and Hope’s romance, but somehow strengthening the bond between Ridge and Brooke.

Somewhere amongst all this mess, Stephen fake-fell-in-love with Pam and almost convinced her to shoot and kill her own sister, Stephanie. No one died, and Stephen ended up going to jail. Fail.

Back at Jackie M, Nick finally learned that Owen was actually the father of Bridget's baby and was devastated. Cue the breakup between Nick and Bridget. Disgusted, Nick washed his hands clean of the mess and hooked up with Aggie. Meanwhile, Bridget, Owen and Jackie decided to all raise the baby like one big, happy family.

Amber Moore returned to Los Angeles and took a job designing for Jackie M. When her work was deemed not good enough, she used a clueless Oliver to steal designs from Forrester. Meanwhile, Oliver kept trying to get Hope back as his girlfriend, but Hope fell in love with a new guy named Liam. It turned out that Liam was actually Bill Spencer's son. Of course, Steffy tried to sink her claws into Liam but to no avail. After hiring Liam to work for Spencer Publications, Bill wanted to promote his son as "the world's most eligible bachelor." Should prove interesting for Liam and Hope's future.

Somewhere amongst all this mess, Thomas publicly made out with an unsuspecting Brooke to draw attention to his new line at Forrester. Yikes.

Finally, the biggest bomb of the year was dropped when Stephanie found out that she had stage four lung cancer. Even more of a bomb was that Stephanie and Brooke found out together, but Stephanie made Brooke promise to not tell anyone else that Stephanie was dying. Stephanie's secret eventually got out and, after being enlightened by an experience with a homeless woman, Stephanie decided to seek treatment.

As we wrap our heads around all of "B&B's ups," downs and everything in between, let's summarize “The Bold and the Beautiful's” successful 2010 year with the following acknowledgements:

Best Male Character: Dominick "Nick" Marone.
After years of turning soft, Nick finally regained his edge once he had his heart ripped out by Bridget and Owen's one-night-stand. Who didn't love the way Nick not only kicked Bridget to the curb, but how he also went on a firing spree at Jackie M? Plus he returned to the boat. Total bad ass.

Best Female Character: Stephanie Forrester.
Susan Flannery continues to bring this character to life, even in the face of death. Stephanie went from daring Stephen to shoot her, to slapping Brooke around (literally), to learning that she had months to live. The ensuing homelessness storyline has revealed layers of Stephanie's character that are deeper than words could even describe. Amazing stuff.

Best Storyline: Masquerade Sex.
There's no way that Brooke could have had sex with Oliver, thinking that it was actually Ridge. And apparently Oliver was so dumb (or just way too excited) that he couldn't figure out he was sleeping with a sexually experienced older woman. Regardless, it set the stage for summer's biggest story and every moment of it was well played. The best part? It's opened doors for future storylines that revolve around Ridge's trust for Brooke. Does anyone else smell a Taylor/Ridge reunion in the near future?

Emmy Award Worthy: Spotlight on the Homeless.
At first I didn't see where "B&B" was going with the whole homeless angle, but the end result was touching beyond words. Kudos to the show for venturing into L.A.'s Skid Row and literally hiring a group of real-life homeless people to share their stories. Don't be surprised to see “The Bold and the Beautiful” take a third straight Emmy thanks in part to this amazing feat.

What's your take on 2010 for "The Bold and the Beautiful?" Be sure to let Soaps.com know by sharing your thoughts in the comment section below. We invite you to join Soaps.com on Twitter @soapoperafan and "like" Soaps.com on Facebook to dish on all soap operas, Glee, Grey’s Anatomy and Vampire Diaries!