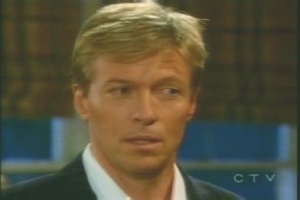 Last year it was actor Dennis Quaid, this year it is (drum roll please) The Bold and the Beautiful’s own Jack Wagner! What is IT you ask? Why it’s Golf Digest’s Top Hollywood Golfer of the Year! While his character Nick Marone sails the seas, his portrayer, Jack, prefers to keep his feet on dry land – green, manicured land with sand bunkers, no less!

The magazine publishes a Top 100 list of Hollywood’s best golfers, ranking them by handicap. Jack ascended the list, coming from a ranking of 11th place in 2005, to knock Dennis Quaid off of his pedestal in 2007! Jack, with a handicap of +0.3, is in most interesting and varied company, ranging from “High School Musical” star Zac Efron (age 20), to award-winning actor Morgan Freeman (age 70), to lively actress Sally Field (age 61)!

Jack told the magazine he actually plays with Dennis Quaid, who gave him a hug upon hearing the news. Of course he also golfs alongside his ex-Melrose Place co-star, and girlfriend, Heather Locklear, who made the list as well!

Wagner is a member of Bel-Air Golf Club and says the best part of membership is being able to talk to fellow members such as Jack Nicholson, Bob Loggia, and Bob Newhart and get insights from them about their careers. Incidentally, Jack’s son, Peter Wagner, won the Bel-Air Junior Championship this year! Seems Peter is following in dad’s footsteps; Jack started golfing at age 10 and won the Missouri Junior Championship as a teen!

Another little bit of trivia: Tiger Wood's all-time low round on tour is 61, and Jack played an all-time low of 62 at Bel-Air! He explains however, that it was in match play, and he had two putts given to him from four feet.

Although he works full-time as a cast member of The Bold and the Beautiful, Jack also plays golf for money on the Celebrity Tour. He laments to the magazine that he only manages to golf once or twice a month, "Full-time job. Full-time father. Full-time Blonde. Gotta' pay attention to that new blonde. You know what I'm saying?"

Congratulations on your achievement Jack, from Soaps.com and your B&B fans!