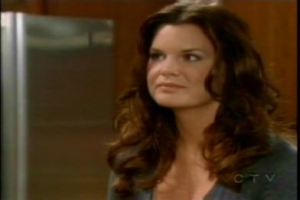 Soaps.com is thrilled to be able to tell you that Heather Tom’s Website has officially announced that the actress, who portrays the beautiful and mysterious Katie Logan, has signed a three-year contract with The Bold and the Beautiful!

Fans have been very happy with Heather’s portrayal of the youngest Logan sister, who, six months after her appearance in Los Angeles, is still somewhat of an enigma! One thing that is very clear, though, is that Heather Tom is a brilliant actress, who will continue to bring many facets to Katie Logan’s personality as she struggles to align her personal values with the somewhat ambiguous morals of her dysfunctional family!

Heather’s acting prowess has been well recognized in the past; she is a two-time Daytime Emmy Award winner (with numerous nominations), as well as a Soap Opera Digest Award winner! Most recently, we are proud to share with our readers, Heather was named “One of Soaps Absolute Best Actors” by the Canadian TV Guide!

As if she isn’t busy enough working at B&B, Heather has also recently indulged her love of theater, performing in a benefit staging of “The Last Night at Ballyhoo” at the Wilshire Theater in Los Angeles alongside her actor brother David Tom!

Soaps.com wishes to offer congratulations to both Heather Tom and The Bold and the Beautiful, as this is sure to be a mutually beneficial deal! We look forward to seeing a lot more of Katie Logan and discovering her motivations and secrets!

Bold and the Beautiful Backtracks: ...