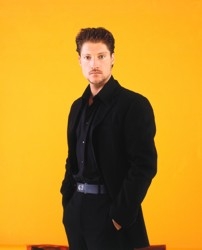 The Bold and the Beautiful‘s Sean Kanan (ex-Deacon) is pumped to have his feature film effort, ‘Hack’, released on DVD today! The December 11th debut of the movie, in which he co-stars with former B&B partner Adrienne Frantz (Amber, Young and Restless), is something he is very proud of, and enthusiastic about! With good reason – he is also one of the film’s producers! The comedy/horror spoof also co-starring Jay Kenneth Johnson (Phillip, Days of our Lives), has apparently received favorable reviews as well!

The Pennsylvania native, who has earned a B.A. in political science from Boston University, has weathered some personal setbacks in the recent past but that doesn’t seem to have affected his career. Happily, he has worked steadily since his departure from B&B, not only on ‘Hack’, but on another film currently in production in L.A.

His newest gig is a thriller called ‘Jack Rio’ which follows the dark journey of a television star trying to live outside the shadow of his onscreen persona. Also at play in the plot is the story of a serial killer on the loose in Los Angeles! Sean is joined in this film by Brian Borlenghi, best known for his role as Brian Bodine on All My Children (also ex-Ziggy, B&B), and Monti Sharp (ex-Justus, General Hospital).

Soaps.com is proud to see a former daytime star working so successfully in the movies and wishes Sean continued good luck in his endeavors! Purchase ‘Hack’ at Amazon.com!

The Bold and the Beautiful...