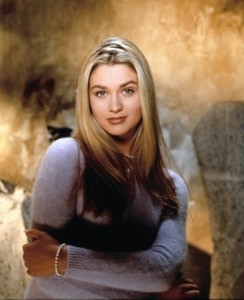 Soaps.com readers will remember Ashley as the beautiful Kimberley Fairchild on The Bold and the Beautiful back in 2001! Ashley’s in the news this week because she has confirmed she was asked to visit the Y&R set to meet executives and see whether they liked her acting style! She says they did like it, and she is being kept in mind for upcoming roles and storylines!

The beautiful actress, who won Little Miss California at the age of 9, modeled at the international level, did commercials, and appeared on magazine covers before landing on television on NBC’s ‘Saved By the Bell (the New Class)’. Of course, from there she graced screens as Kimberley on The Bold and the Beautiful, so she is already familiar with daytime, CBS and the Bell family!

Since leaving B&B, Ashley has gotten married, guest-starred on television shows such as ‘7th Heaven’, ‘Hey Arnold’, and as a guest host for ‘E! Entertainment Television’! She has also appeared in films, notably, ‘Skulls 2’ in 2002, and more recently in ‘Love Brought Me Back.”

Soaps.com is pleased to share this news of Ashley’s possible return to the CBS soap world and wishes her luck in all other endeavors as well!

Where Are They Now? Antonio Sabato...